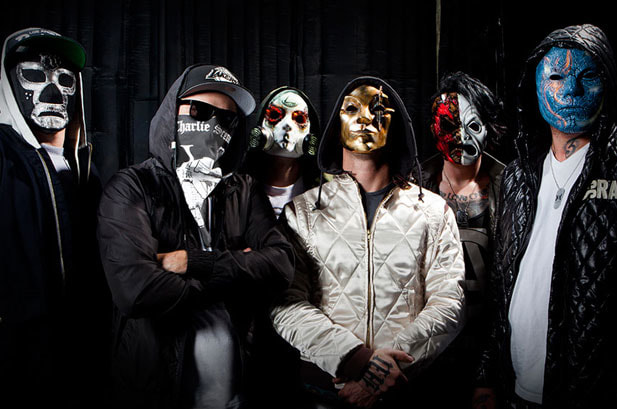 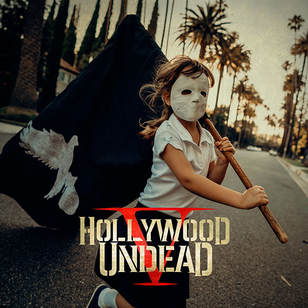 When I first got asked to have a look at Hollywood Undead’s new album, I was honestly a little excited. I’d never listened to any of their previous albums, but I figured with a new album, it would be a great time to find a new band to listen to; especially as I’d been meaning to check them out for years. However, ‘Five’, left me wondering just how worth my time it would be to have a browse through their discography. But let’s not get ahead of ourselves and have a look at ‘Five’ (coincidentally enough called that because they’re now a five piece and this is their fifth studio album).

The album starts off with the lead single ‘California Dreaming’. It starts off with a heavy guitar and a sound that couldn’t be confused for anything else but classic rock, with the guitar and drums carrying the song forward. The first thing that surprised me about this album was the nu-metal vibe that was present in the first few songs. However, the song wears out its welcome pretty quickly and starts to lean towards the repetitive side. On the flip side of that there is some interesting imagery (‘I can feel my dreams go cold’) is an interesting exploration of burning yourself out before you even get the chance to achieve what you want.

Skip forward to the third song and you’ll find ‘Bad Moon’, and for the first half of the album at least—the electronic influence really works well with the vocalist and the instrumentals. In terms of lyricism, this song feels a little standard. Despite some of the other chorus’ on this album being strong and catchy, the chorus for ‘Bad Moon’ feels a little worn out, almost as if it goes on for far too long.

The next song, ‘Ghost Beach’ is definitely one of my favourites. The slower tone here, along with the addition of the keyboard is a welcome respite. ‘You can sell yourself if you’ve got no soul’. The slowness of the song really helps to key in the song’s story. It explores the stereotypes that are most often associated with LA, and the lifestyle that famous people lead. It goes on to explore the idea that they can’t seem to find the LA that they once loved, and I find it all the more poignant when a lot of the times, we feel as though we remain the same and the places are the things that change (unavoidable Real Friends reference there). ‘Broken Record’ and ‘Ghost Beach’ were without doubt the strongest and most confident songs on the record. The plucky guitar in the intro of ‘Broken Record’ made the song sound and feel cleaner than the songs that preceded it. The lyricism here (though it borders on being cheesy) feels as though it becomes a lot deeper with lines like: ‘but I won’t ever read them cause I’m too afraid to look’. It’s an interesting line about being too afraid of facing your fears, or maybe the thoughts that are in their head are just too horrible to contemplate on.

Whatever interesting ideas they’d managed to explore on ‘Broken Record’ and ‘Ghost Beach’ get forgotten about in ‘Nobody’s Listening’. The song’s opening lines, ‘sing like there’s nobody watching’ are unfortunately, nothing short of cringe inducing. However, the theme of the song itself is kind of admirable, of the band not wanting to hold their tongues because life is too short—but it feels a little generic, the message of the song is something that we’ve head over and over again and we definitely see them fall into the traps that made some of the tracks in the beginning half of the album feel a little weak.

Perhaps the biggest issue with this album is the genre jumping. By no means is it a bad thing, and no artist should feel inclined to only make one genre of music, but ‘Five’ can’t seem to make up its mind on exactly which genre it wants to be the leading element, and this is all the more prominent on ‘Pray- put ‘em in the dirt’. The song takes a very jarring direction into heavy metal, and the production of the songs start to feel a little polluted with far too many instrumentals. The album jumps wildly between EDM, heavy metal, rap and electronica, but with each change it’s clunky and far too noticeable. The EDM on the last few songs of the record are so repetitive that it’s honestly a little headache inducing.

From the last four songs onwards, the positives of this album really start to wear a little thin. ‘Cashed Out’ is another track that swings between genres, more hip-hop inspired. The lyricism here is dry and offers nothing that hasn’t been said a thousand times before. This part of the album really starts to feel incredibly confused in terms of themes and musical influence as it just jumps crazily from one genre to another, and a lot of the songs just start to blur into background noise.

The thing about this album is that it had a lot of untapped potential, but the band really struggled to take that potential and run with it, the slower songs such as ‘Ghost Beach’ really showed that the album had the potential to shine. The first half of the album was interesting, if not for its lyricism then for its musical composition. However, from the halfway point onwards—it really feels as though the band gave up—and the lyricism is nothing short of pure cheesiness. The production of the songs starts to feel cluttered and the album just started to feel like a mess.