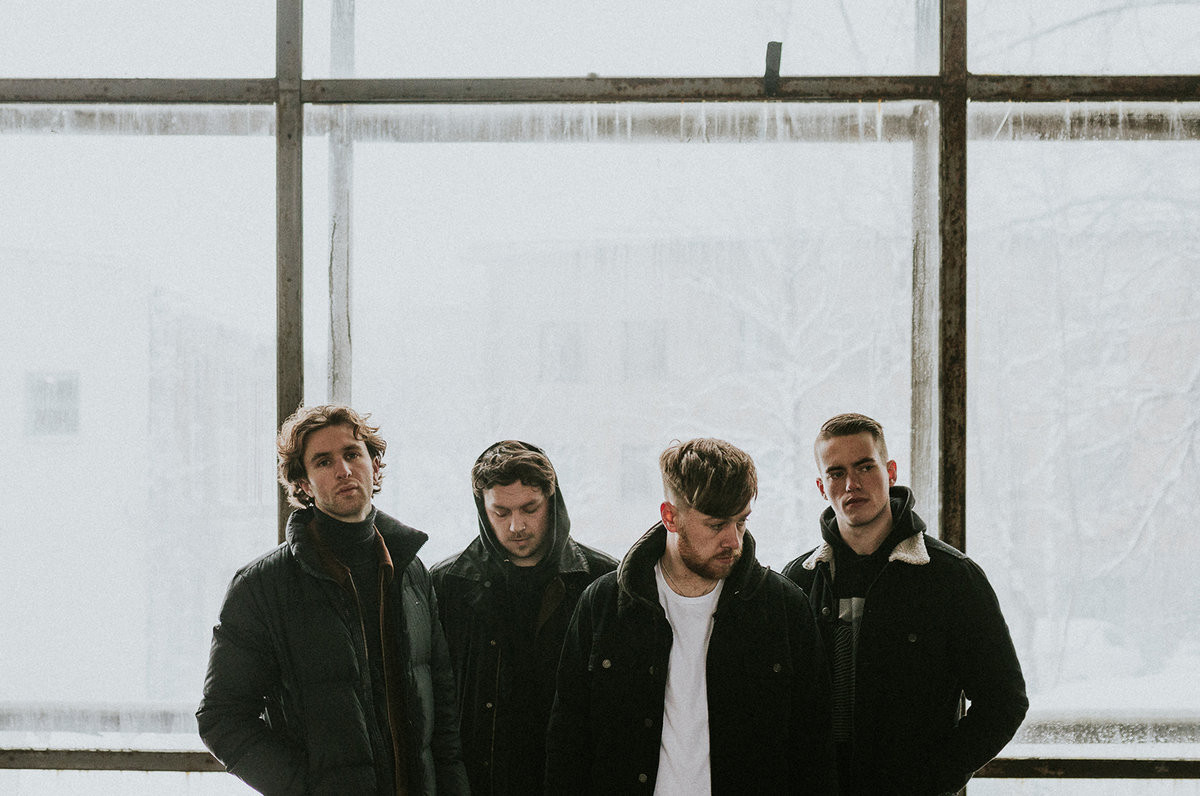 The UK-based band Acres, whose music cannot be labelled under a certain genre recently did a trek through Europe to promote the release of their brand new debut album ‘Lonely World’. Even though this is just their debut album, the band already played headliner shows across the continent. Just before their show in Dynamo, Eindhoven, we sat down with the band to discuss all things surrounding their new album, life on the road and more. Read what we discussed right below.

Q: How are you guys doing?
A: Great, a bit tired, we left at 4:45 this morning to get here. We played South Hampton yesterday and we got back at 1, so not a lot of sleep! We played South Hampton first to warm up in our home town and now we have 12 days here in Europe and then we head back to the UK.
We think this headliner tour has been a long time coming, we’re gonna put a lot of effort, as we haven’t headlined properly yet.

Q: Did you do many festivals this summer?
A: We did Jera, Wacken and two others. Two in the UK and two in Europe.

Q: Which shows do you prefer, the festival performances or the intimate club shows.
A: We like ‘em both for different reasons. At Wacken, we played to like 6.000 people but maybe 100 people knew who we were. Then yesterday, we played to 100 people and everyone knew who we were. It’s a different vibe, it’s nice to play to huge crowds but then when you play to smaller crowds and everyone is there to see you, it’s even better.
So we prefer the smaller ones. Festivals are great to play for new people, but we get super stressed at festivals, so the headliner ones are our favourite. It’s a chance for fans who know us to come and see us, but it’s also a chance for us to talk to them and hang with them.

Q: Do you get more nervous about the huge crowds?
A: Yeah. For sure. I think the most nervous I’ve been is when last year, we did a tour with Silent Planet and the last show was Knockdown festival in Germany and that was the most hectic show we have ever played. We drove through the night and got to the venue at half 10 and then we played at 12. So we got out the van, set the gear up and there were 3.500/4.000 people there, which was the biggest crowd we had played up until then. We barely had any sleep or breakfast, so that was terrifying, yeah.

Q: Let’s talk about the new record “Lonely World”. For the readers who haven’t listened to it yet, could you tell us something about it?
A: It’s a huge step-up for the band. You can really see how the band has progressed. It’s just working right now. It was an enjoyable process, it took about a year to write and then we took it to the studio. We weren’t too sure how fans were going to take it and it’s been really cool to hear how people are enjoying it.

Q: As a band, is there a certain message that you wanna send to your listeners?
A: Every song is written from personal experience, something that has happened to us and that we want people to relate to and connect to. The main message that we wanted to give to people is that when you are dealing with stuff in your life, you’re not alone, there are people that you can talk to. That’s what we wanted to show.

Q: So the message is “You’re not alone, there are people going to similar processes”, yet the title, “Lonely World”, contradicts that. Why is that?
A: When I wrote the track “Lonely World” I had a friend who met a girl and left his whole life for her and he ended up living in a car and it all went to shit with him. He was left with absolutely nothing and he ended up staying at my house. We were having beers and he said to me “It’s just a super lonely world” and that’s where that track came from.
When we were working on the title for the album we worked up a few different ones and nothing felt natural to what it was all about. It is about feeling lonely and all these different emotions. You know when something sounds perfect and “Lonely World” was that.

Q: Could you tell us something about the getting together of the band?
A: Acres has been a band for a bunch of years, it was started when most of us were teenagers. It was just an outlet for us. I (Alex) was in a metalcore band and stuff I wasn’t vibing and I wanted to express what I like and I started writing demos and sending them to friends and they would like it and would ask me to come play. The band has now slowly turned into everyone’s outlet and that was what I wanted for the band. Especially with this new album, it has become everything we wanted to be. We met each other from other bands and we still needed all the band members, so we kinda “stole” each other from their old bands. None of us were friends previous to the band and it was natural.
We think that with the new record we are just what we are supposed to be.

Q: So you’ve all had previous musical experiences and now you’re Acres, is there any advice that you would give to youngsters who are just starting out?
A: Definitely! Write the music you want to hear. Don’t try and copy your favourite band. Take inspiration from music and the artist that you like but don’t try to be them. Make it your own. If you are already in a band, I feel like you have to say yes to everything. If you are a young band and you get an opportunity and you don’t think that you can afford it, just say yes and work towards affording it. Our first tour ever was a European tour because a German band asked us to join them because they heard us on band camp and they liked what we were doing, so they wanted us to join them on their first tour ever.
We’ve played pubs, squads, someone’s living room and God knows what. In our old bands, we played even worse. There was this venue, where the tiniest stage ever, in the corner, was next to the toilet, so people would only watch us when they had to take a piss.
We have had really weird experiences by just saying yes, but you learn from it and you grow from it and then you appreciate it when it does get better. Don’t expect to be famous overnight. Nowadays it is a lot easier with the internet.

Q: In the process of creating the new record, you make music you want to listen to yourselves, but is there a little voice inside your head that wonders what the audience wants?
A: Definitely! With “Lonely World”, there are some parts, which I know I like and are fun to play, but aren’t for everyone. But we know someone is going to like it. If you listen to our EP, every song on that is different, both soft and heavy stuff, and that was on purpose to see how people would react to them and what kind of songs were going down the best.

Q: Are there any artists whose live shows you really look up to and draw inspiration from?
A: Definitely! Underoath is one of our favourite bands. Bands like Thrice, which is the total opposite.
We want people to see us a band that they enjoy watching live, like they have experienced something at the concert. Whether it was really tight, or really energetic, or the light show was really sick. As long as they walk away and have really experienced something, we’re happy. The main point of a live show is to be there in the moment, whether they are moshing or in the back drinking a beer.