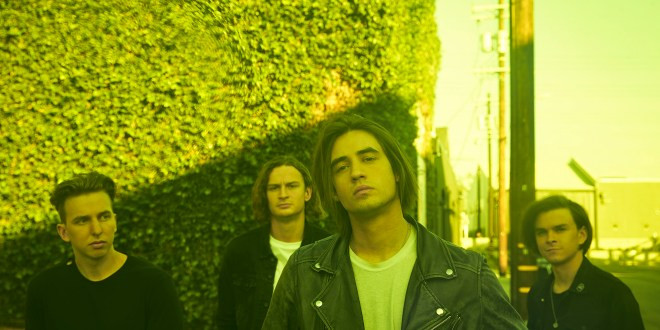 No matter how much I love a band or artist, when it comes to sitting down and listening to a new album, I am always hesitant out of my irrational fear of disappointment. However, it seems that Perth foursome, The Faim, are unable to disappoint me if they tried.

Since the band’s formation in 2016, The Faim have hurled themselves headfirst into the alternative music scene, working with some of the biggest names in the pop-punk world, such as Pete Wentz, Josh Dun and Ashton Irwin. After their astounding debut EP, ‘Summer Is a Curse’, released in 2018, my expectations for the band’s debut album, ‘State of Mind’, were unrealistically high. Yet still, my expectations were obliterated. Being inspired by bands ranging from The 1975, to Red Hot Chili Peppers, to Metallica, it is easy to understand from where The Faim’s eclectic sound, which is so evident in this album, is derived, and how their music has had so much success resonating with fans from all over the world. In my opinion, ‘State of Mind’, is a homage to the past of The Faim and the fans that they carry with them, but also presents a shift in direction for the band and is only the beginning of their musical journey.

From less than 2 seconds into track one of ‘State of Mind’, I already knew that this was going to be an album to enjoy. The heavy bass that opens ‘Tongue Tied’ and is heard throughout the track provides the album with an explosive and energetic beginning that’s unlike anything The Faim have released in the past and clearly shows a diversion from the expected, leaving us in anticipation for what’s to come. Lead singer, Josh Raven, recently described the track as “an enigma amongst the album”, in the way that ‘Tongue Tied’ sounds like nothing the band has released before, yet to me, the track still manages to slot perfectly into the album’s sound and acts as a clear marker of The Faim’s incredible versatility. It’s the kind of song that you not only listen to, but you feel throughout your whole body, and it’s easy to imagine the powerful bass-line pulsing through you in an arena.

Moving on to track two, The Faim hastily dart away from the edgier and more risqué themes in ‘Tongue Tied’, using ‘Humans’ to provide a refreshing and reassuring outlook on life, which makes this track seem somewhat more universal than others on the album. Of course, we can’t ignore the sheer musical talent of the band members, but with ‘Humans’ in particular, the song’s concept and band’s lyrical ingenuity seems to shine the brightest. The track’s empathetic and intensely relatable lyrics, such as “Sometimes you gotta break just to know you’re human”, clearly showcase The Faim’s extraordinary ability to place themselves in their listeners’ shoes, whilst their clever riffs and beats work together to help the song’s message (of how the ways in which we react to life and its obstacles are what make up our identity) hit even harder.

Track three, of course, is ‘Summer Is a Curse’, the one we all know and love. With over 13 million streams on Spotify, ‘Summer Is a Curse’ is undoubtedly the song which helped The Faim progress to become an internationally recognised band, and makes the perfect addition to ‘State of Mind’. Whether you’re a diehard fan being reminded of how far The Faim have come since the track’s release, or a new listener learning more about the band’s earlier work, this is certainly a song to enjoy. Despite lacking some of the emotional integrity of other tracks on the album, the song’s poppy and catchy chorus assures that ‘Summer Is a Curse’ will be an earworm for weeks to follow.

For each band member, there seems to be a song on ‘State of Mind’ which clearly highlights their incredible talent, and with track four, Beautiful Drama, it is the drummer, Linden Marissen’s, and lead singer, Josh Raven’s time to shine. The vigorous, penetrating drumbeats provide the track with an exhilarating intensity, that allows Josh Raven to hone the sentiment of the song and load the melancholic lyrics with more meaning, and leaves us with no ambiguity over why fans and The Faim alike, often jokingly call this track ‘Beautiful Drummer’.

Track five is the catchy, yet somewhat dark, ‘Buying Time’. Like other songs on the album, ‘Buying Time’ harbours classic elements of The Faim, such as Sam’s addictive riff in the introduction or the meaning that Josh puts into his vocals and with this track the band’s pop-punk influences, such as Panic! At The Disco, are particularly noticeable, so much so that if ‘Vices and Virtues’ were made today, ‘Buying Time’ would fit right in. At first listen, the track sounds like an upbeat pop-punk anthem, yet after learning about the meaning of the song, which is about the lead singer’s late friend, the lyrics become slightly tainted with discomfort. The bewitching guitar riffs and pitch-perfect vocals throughout ‘Buying Time’ leave us enveloped in Josh’s emotion and clearly demonstrates how The Faim, Josh, in particular, are able to use their pain to create something beautiful, as they’ve done with this track.

Next up is fan favourite, ‘Infamous’. Fans have known and loved the live version of ‘Infamous’ for an extremely long time, making some lose hope that a studio version of the track would ever be released at all. Yet at last the ever-meaningful song is finally out, and it’s now completely understandable why it took The Faim so long to release. Seeing as so many fans are so emotionally invested in this track, it was even more important for The Faim to perfect it, even returning to and rerecording parts of the song in order to make it more similar to the live version and it’s safe to say that The Faim have the studio version of ‘Infamous’ down to a T. Stevie’s twinkling piano intro paired with the devotion and force behind Josh’s vocals is utter perfection and perfectly recaptures the comforting and homely feeling that fans feel when the song is performed live.

With the seventh track, similarly to ‘Humans’, the star quality of ‘Amelie’ is its unique concept and profound message to its listeners. Amelie is a fictional character created by The Faim; she is a girl who’s faced every possible obstacle that life could ever throw her way and is living in a world of total negativity, which eventually she isn’t able to make her way out of. The track is a brutal and harsh reminder to be grateful for everything positive in our lives and not drown under the pressure of life’s trials and tribulations. The musical composition of ‘Amelie’ fluctuates throughout the track, beginning with endearing guitar riffs paired with ominous production, moving onto the eerie backing vocals and piano heard in the bridge, leading us into the electrifying last 50 seconds of the track, that’s heavy bass and violent drums can’t help but make our limbs ache after jamming to it.

Lyrically, eighth track, ‘Words Apart’, is one of my favourites on the album. Dealing with complex emotional ideas, this track is one which again clearly shows off the band’s lyrical ingenuity and versatile abilities. However, musically, ‘Words Apart’ is also extremely impressive; the track takes a step back from Josh Raven’s powerful vocals heard in other tracks and allows the other musicians to highlight their incredible talent. Undoubtedly, the catchy chorus will be stuck in your head instantly and you won’t be able to stop yourself from bopping your head. The catchy nature of ‘Words Apart’ and the track’s abrupt ending allows for the vulnerability of next track, Where the River Runs, to catch us by surprise and immediately send a lump to the back of our throats.

The ninth track, ‘Where the River Runs’, is a clear outlier on the album. As we move from the heavy production and catchy chorus of ‘Words Apart’ into the emotional and exposed piano heard throughout ‘Where the River Runs’, there is a clear sense of lead singer, Josh Raven’s defenselessness, which we don’t hear quite so much on any of the other tracks. The lack of production or overly complicated instrumentals break down the wall between the band and listener and reinforces The Faim’s message, which is consistent throughout ‘State of Mind’, that we all face obstacles in life, but it’s up to us how we respond to them. My five-year-old cousin described this track as “butter in her ears”, and quite frankly, I can’t come up with a better analogy myself; Josh’s delicate vocals melt into the simple piano, drowning us in a bittersweet reminder to find comfort in our pain. As someone who’s family upbringing wasn’t the smoothest ride, this song became a real tear-jerker for me, as it made me blatantly aware of how a piece of music can make someone feel so heard and I’m sure many others feel the same way about the track.

The final song, sharing titles with the album, is ‘State of Mind’, and a clear climax of the album for me. Although seeming like a total step outside of the box for The Faim, this track remains true to the band and clearly highlights the different aspects of music that all four musicians, Sam Tye, Stephen Beerkens, Linden Marissen and Josh Raven, bring to the table. Whether it be Josh’s passion and powerful vocals, Stevie’s classical training, Sam’s enchanting riffs or Linden’s rock influence, there are traces of it all within this track. As well as showcasing the band’s talents, ‘State of Mind’ also perfectly encapsulates all the songs from the album, with the haunting bridge and frenzied outro echoing those of ‘Amelie’ and the pre-chorus giving off the same chaotic energy as ‘Tongue Tied’, smoothly concluding the record and creating the perfect ending to a perfect album.

The Faim’s first studio album, ‘State of Mind’, is one that places a huge emphasis on The Faim’s overall desire as a band – to maintain their intense “hunger” to create music and pursue their absolute passion. There was never any doubt that The Faim deserve every bit of their success, but ‘State of Mind’ is a clear reminder of just how talented the band are and just how far they’ve come in such a short amount of time. Other artists could release countless studio albums, but without the devotion and determination of The Faim, they would never get very far.