INTERVIEW: American Sun, The Message Behind The Music & More With Fire From The Gods 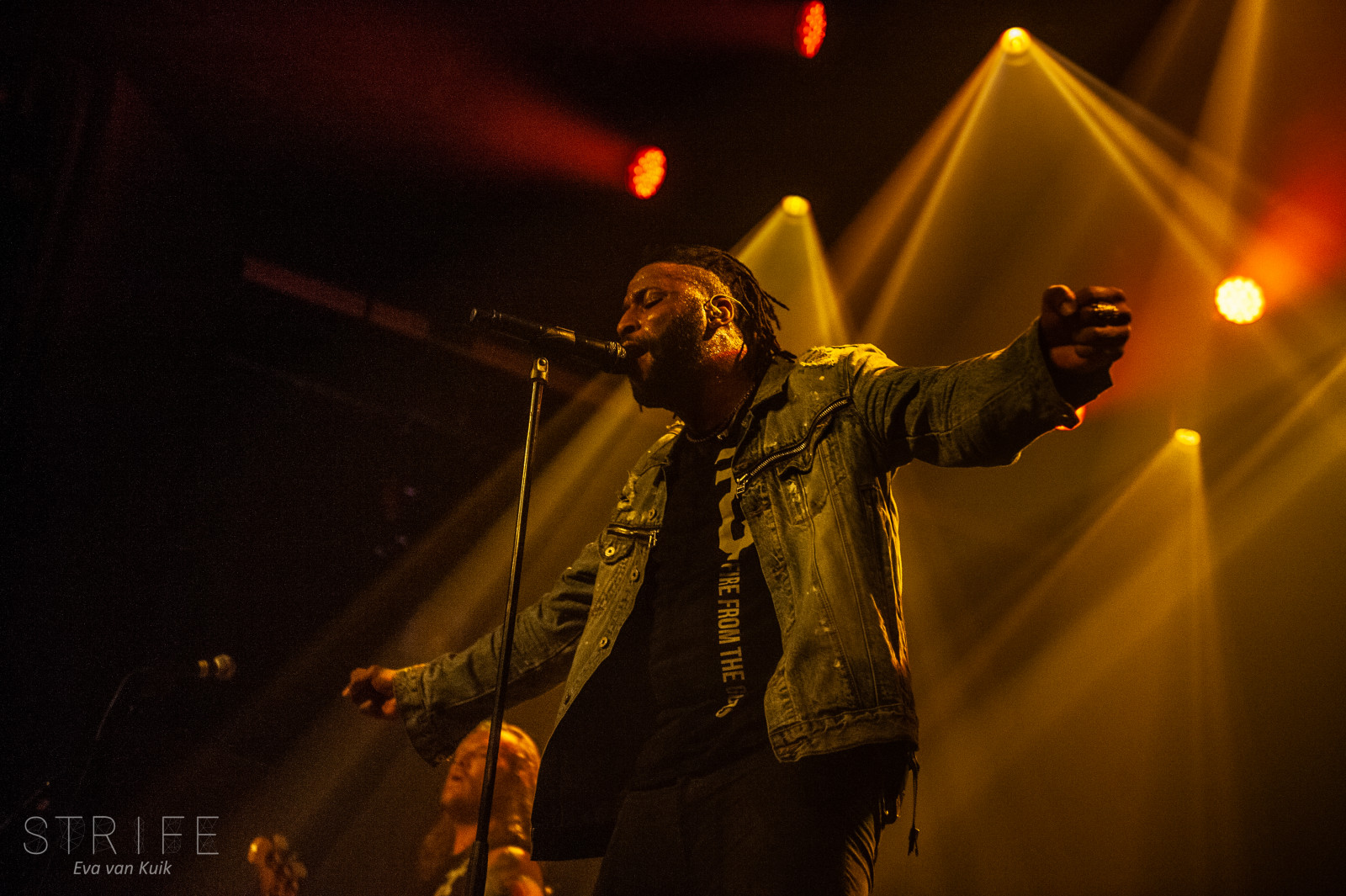 Texas-based quintet Fire From The Gods recently released their sophomore album ‘American Sun’ and with that, took their popularity to the next level. The lead single ‘Right Now’ has been streamed millions of times and the band are playing shows all over the globe. Currently, they are on the road with The Hu and we sat down with vocalist AJ Channer to discuss their new music, the message behind their genre-bending music and more.

Q: How are you?
A: I’m fantastic! Just really excited to be here. We arrived yesterday morning in Amsterdam and.. you know.. did the thing. We enjoyed a beautiful day off in Amsterdam and we still have about another week and a half of this tour and thus far, it’s been amazing so we are just expecting another cool ass day. This is one of the major stops in Europe for rock and metal so I’m expecting it’s gonna be really cool!

Q: How has it been touring with The HU?
A: Their music is so compelling because of who they are. They are a Mongolian throat singing metal band. In my years of listening to heavy music and metal have never heard anything like it or even thought I would ever hear anything like it and to top it off, it’s so popular. At first, we were quite hesitant because all I remembered of them was that video from Facebook, but to see what they’ve done from last year to this year and how big they have gotten and how people love them and the way the crowd has responded to us opening, it’s been really cool. I;m super stoked and it’s really cool touring with those guys.

Q: How has the crowd responded to you so far?
A: Yes! Because we were added to the tour so late, the people that typically wanted to hear Fire From The Gods or knew about us in the EU or the UK, weren’t able to get tickets because they were all sold out. So we are playing to basically 90% of people who have no idea who we are. You can tell, because when we start they are like ‘Whaaat?’ but at the end of the set, people are into it and the action and interaction between us and the crowd is just really cool. They have treated us really well. It’s great to get some new fans.

Q: Are you guys coming back any time soon to visit those new fans (and older fans)?
A: Yes! We are coming back for Graspop, Hellfest, NovaRock in Austria, RockAmRing, a new one called Sunstroke, in Ireland, this is only their second edition. So we are doing the whole festival round. After that, we are probably coming back for a full tour. With whom, we’re not sure yet, but it’s been so long and we haven’t really been on proper tour yet, so we will do that as much as possible.

Q: Speaking of the record, congratulations! How have the responses been overall?
A: It’s been great! When we first came out with ‘Narrative’ a lot of people didn’t know who we were or what we were about. But now, with ‘American Sun’ I think that people understand the message of the band and they know what we are talking about and what the music is about. We still keep them guessing, especially the new fans who have only heard a couple of songs, but the reaction from ‘Narrative’ to ‘American Sun’ has really upped the profile of the band and is really helping our careers as musicians and the life of the music and the message. 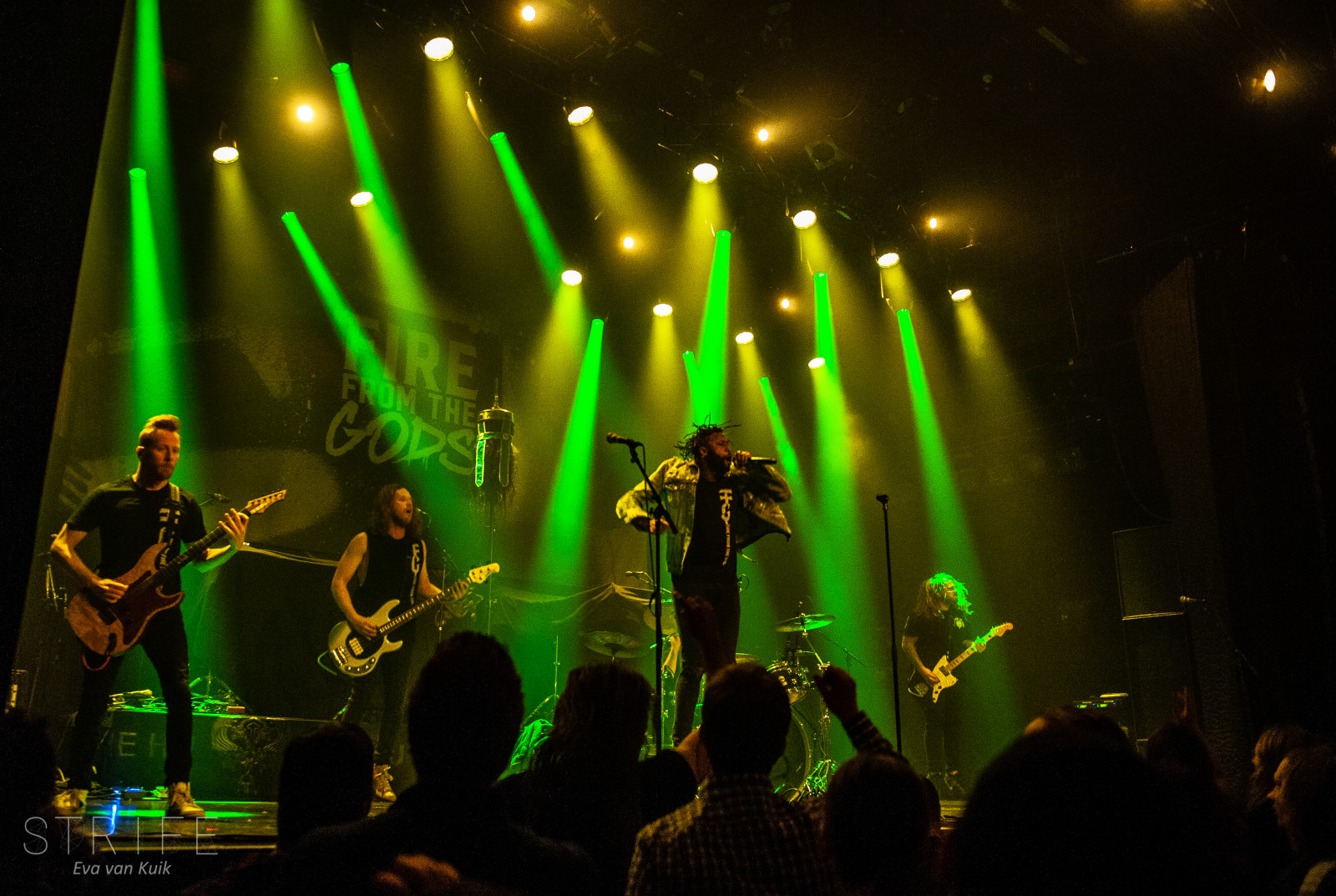 Q: This is the second album with Rise Records, have you noticed any differences between recording the two records?
A: It’s between Rise and Eleven Seven, they did a collaboration to put this record out. That was unprecedented as well, 2 labels. They came together to help us get the record out. So there were 100% big differences between recording the two records. The creative process for ‘Narrative’ was very staggered and we did it in patches. But when we actually recorded it, we went into the studio over the holidays in New York and it was our first record in a massive studio with David Bendeth, who worked with Bring Me The Horizon, A Day To Remember, Breaking Benjamin and so many others. We had about a month and a half to get this thing done and it was really tough. But from it came a lot of good things.

But with ‘American Sun’, we were a little bit more stable and the band was a little more mature. The team behind us was bigger because of the collaboration so we had a lot more time to work on it and we went to L.A. and created the bulk of the record and we recorded it and we did it over 2 months. It was flawless and everything went really smooth and I think you can hear the difference in the record, the pain that was involved in creating ‘Narrative’ versus the overall comfort of mindset that we used to create ‘American Sun’.

We feel like it is our time now, there is a big revival coming in rock. So we thought if we’re gonna put another record out, we’re gonna. Put. A. Record. Out. So we put our best efforts behind it, everyone involved. 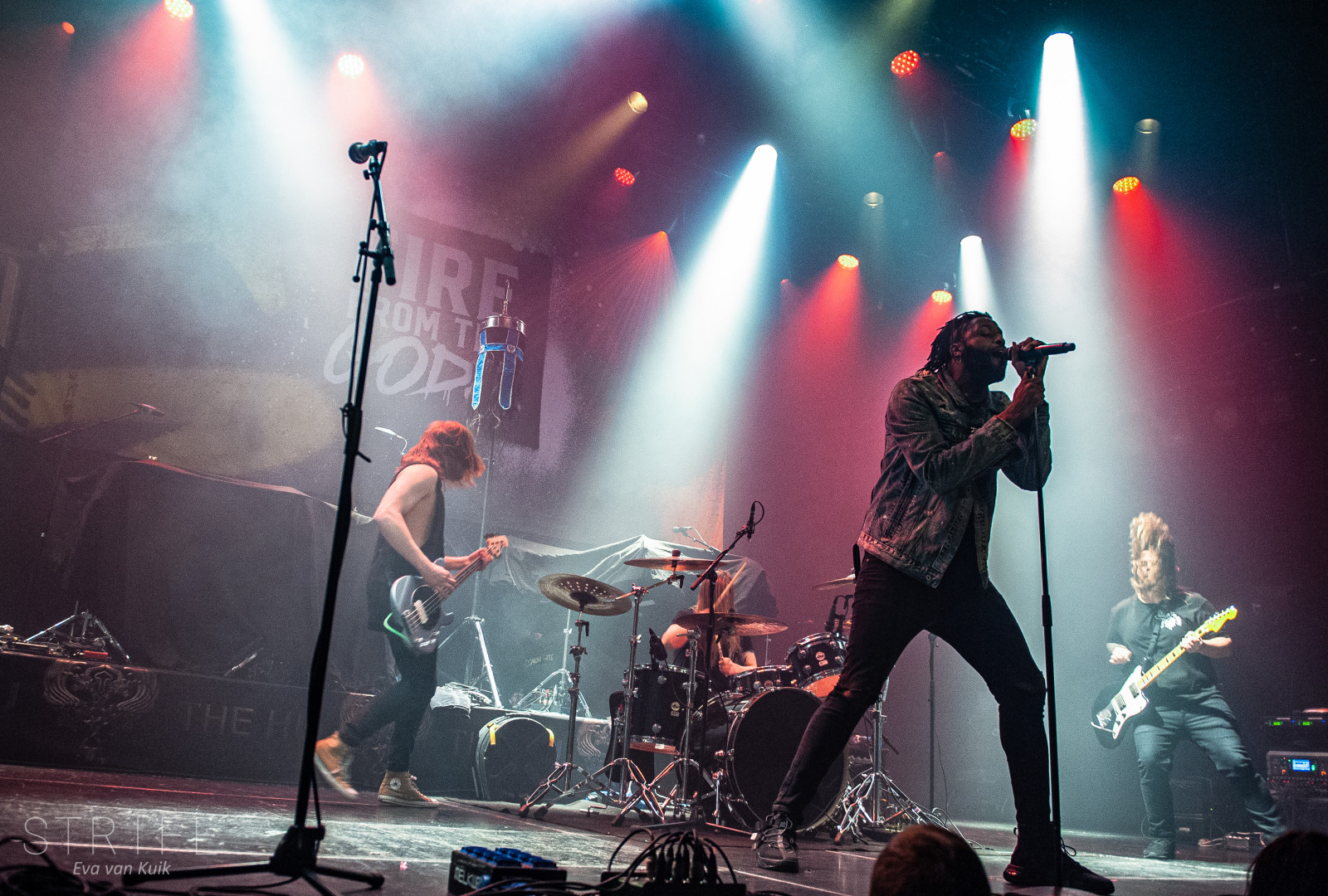 Q: You said earlier that you keep the new fans guessing what Fire From The Gods are about. If you had to describe Fire From The Gods and the new record in like 5 key words, how would you do it?
A: That’s a good question.. The new record is powerful, it’s more melodic, there’s a little bit more thought that went into it. It was fun, it’s a fun record! There’s a lot of cool shit on there. The message is a lot more driven home,. There’s darkness in life, so let’s move on to a new day.. A new American sun.

Q: Speaking of the message, you talk about a lot of important issues, everything is included. Why do you write the lyrics that you do? Is it to inform or is it an outlet for you?
A: Both. Because I believe that right now education and information are the most important keys to success. Not our personal success but the survival of the human race. We have done so many things in the past, the hatred, the violence, the anger. We’ve tried that and there’s too much of that. So why not try a little bit of unity, a little bit of empathy and understanding. Through our music we’re informing people of what’s going on but we’re also speaking truly from the human spirit. Fuck the politics, fuck the money, fuck the Gods. It’s all about how we feel as people and if we know that there is something wrong, that means we can change. We want something to change because I don’t want people to be treated the way some people are being treated right now. I don’t want anyone to hurt and I don’t wanna be hurt so why would I want to try to hurt you or why would I support something that hurts you. That’s not conducive to changing the world and to being better people. So that’s really what the message is on ‘American Sun’ and that’s who we are as people. So it is informative but at the same time it is an outlet to speak out the soul of the human and speak straight to humanity and not the lefts and the rights. I’m not speaking to a voterbase here, I’m not a fucking politician. I’m an artist so I just give.

Q: The first record came out with a deluxe edition, ‘Narrative Retold’, with a beautiful acoustic rendition of ‘Excuse Me’. Is that something you want to explore further?
A: Yeah, man. We want too. We have some demos of reimagined versions of ‘Right Now’ and songs on ‘American Sun’. But I think once we get later in this recording cycle, we might combine some of the ‘Narrative’ stuff and some of the ‘American Sun’ stuff and maybe put out like a ‘rethought’ kind of EP. Like hip hop versions or acoustic versions, to change it up a little bit, but we’ll keep you guessing. We wanna do it all, it shows diversity and it shows that there is real heart in our music. 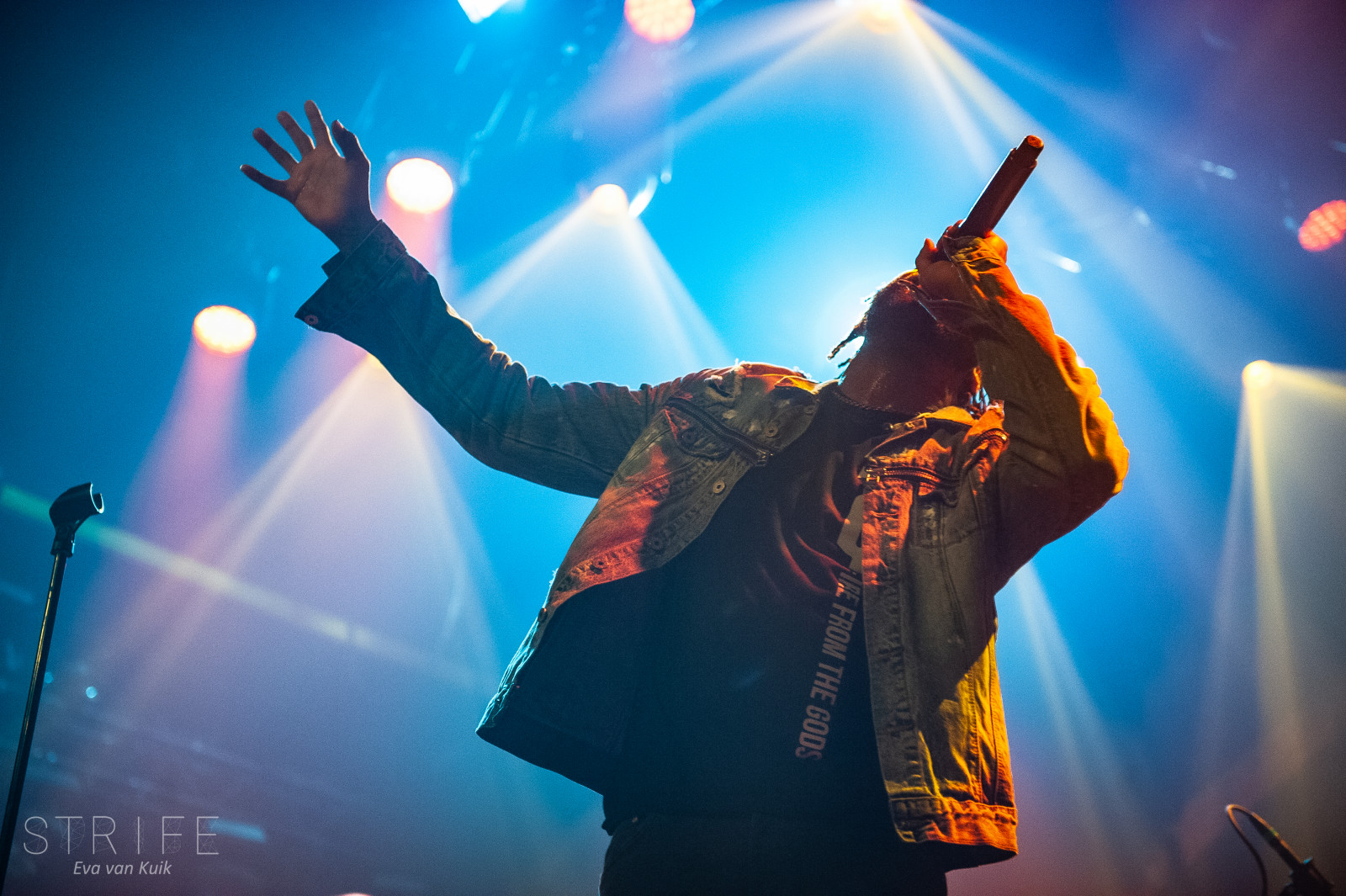 Q: What advice would you give to younger bands who are just kicking off their music careers?
A: Focus, work hard. Don’t be afraid to be an asshole and get on top of people to listen to your music. That’s what I did for years. I was just up people’s asses all the time and making calls and sending emails. If you believe, you just gotta find that someone else that also believes and you convince that person to believe and you and from there you keep fighting. Don’t stop. And don’t think that everything will be done on the internet. You gotta put that work in on the road. You have to leave home and get in that shitty van and you gotta do it.

Perseverance is key. We all came from other bands and we had done the same thing with other bands but we knew that we wanted to do something that spoke of our real selves in music. We were all doing metalcore and hardcore and deathcore but we wanted something different. So when we got together, we knew that we wanted to be a bit different. We knew we wanted to change the game a little bit. That’s what we did and once we did it, we went out on the road, unsigned, we were playing to ten people or two people or to the bartender and his cat. But all in all, everything keeps getting better and better and that’s why perseverance is the most important thing in this business. Your favourite band was once a shitty local band.

So yeah, it’s great that we are now in Europe, we have been waiting for this. We just got our first top 10 single on the charts. So a lot of cool things are happening for Fire From The Gods and we just wanna continue that and stay humble and continue to fight the good fight.