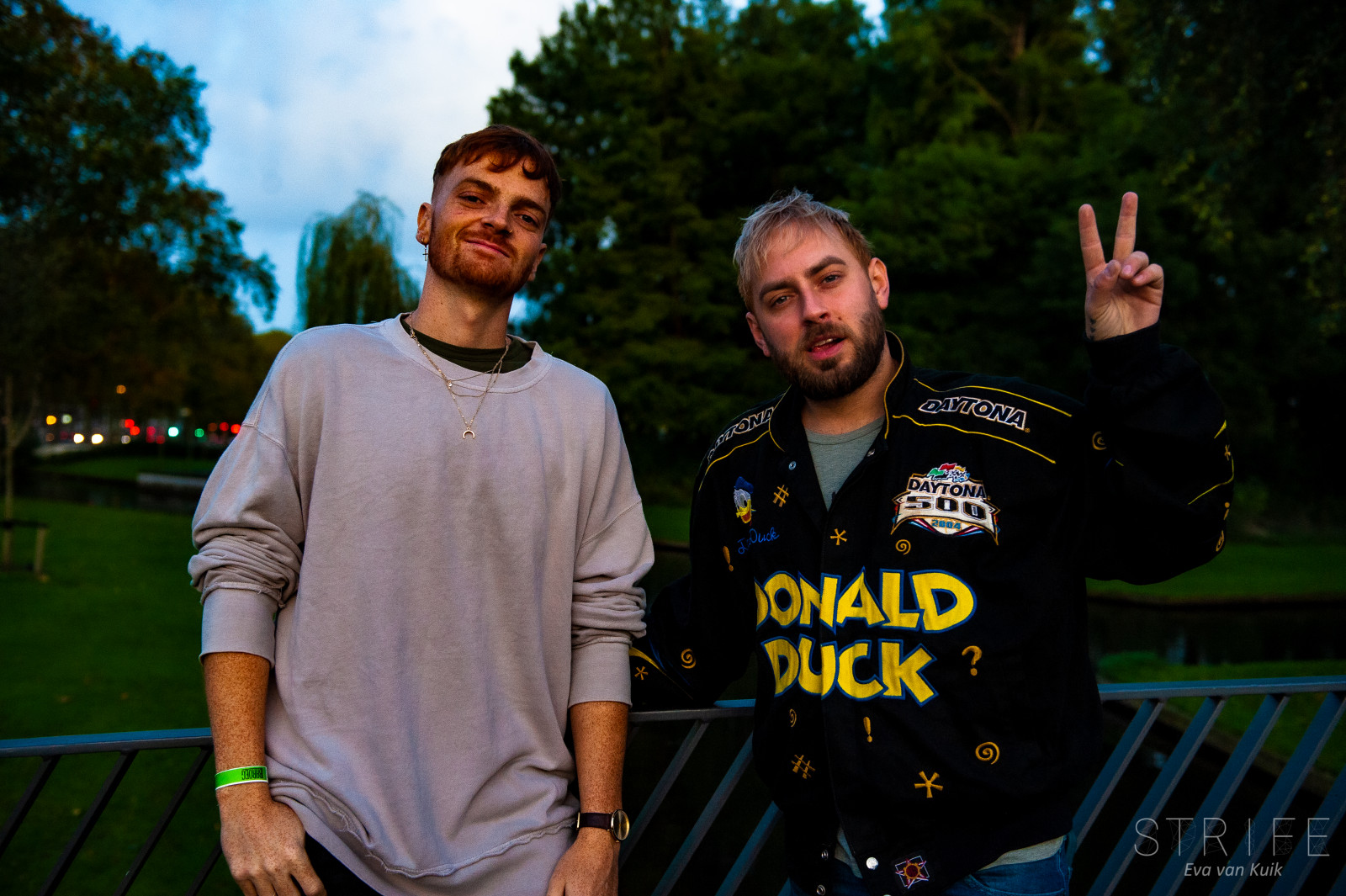 While on the road in Europe playing a handful of smaller shows in order to support the release of their brand new album ‘Beautiful Oblivion’, we had the chance to sit down with Issues frontman Tyler Carter and drummer Josh Manuel to discuss the brand new album. Here’s what went down during our conversation:

Q: First of all, how are you?
Tyler and Josh: Good!
Tyler: It’s nice here. It’s getting kind of chilly though. It was just starting to get a little bit breezy where we’re from so we didn’t pack real jackets, just sweatshirts.

Q: With tonight being the second show of the tour, how was the first show?
Tyler: Better than I expected, honestly. We knew it was going to be small intimate shows, that was the whole point of coming back to Europe and making a new album and trying to promote the new album and rebuild ourselves here because we haven’t been here in a long time. But considering how intimate the show was, it was really energetic and people were really nice, we got to meet everybody after. We also did an acoustic performance at the Ramones-museum.
Josh: It was the first time we played like 6 new songs of the new record, so it’s nice to, after years of writing, to finally start touring and playing it.
Tyler: Yeah, we’re sick of playing the same music. But at the same time, we’re really nervous about playing the new music. But since we broke the ice, tonight I think is going to be even more fun.
Josh: It’s so beautiful here, right by a park.
Tyler: The grass is so green here, too. It’s always gloomy or rainy in Europe, but the grass is so green. It’s very nice.

Q: Congratulations on the release of the new album! A relieve that it’s released?
Josh: Yeah, very much so! It took 3 years.
Tyler: Yeah, we were writing a lot on and off but it took 3 years to put out new music and it took a decent year to curate the album and record it, which was nice because we always try to rush it into a month.
Josh: This time we had much more time. We wrote like 45 songs going into this. Early stages, like first chorus, not full songs. But enough to know if it sucks or not. Originally we narrowed it down to 20 and then we argued for like a week or two over the final 13 that would make it.
Tyler: We’re talking about just making a new album in the next year
Josh: Yeah, we still got a bunch of stuff, there are like 6 songs that we all really love that didn’t get a chance.
Tyler: We would have pulled a Drake and put out a 20-song album if we could.
Josh: We almost did! We tried to convince the label but they said “absolutely not”.
Tyler: We already went 3 times over budget, so they wouldn’t do record songs.
Josh: I think the 13 that made it, every song in there serves a purpose. They round up the dynamic of the record.

Q: For those who haven’t heard it yet, could you tell us something about the content as well as the artwork?
Tyler: Yeah, we had a bunch of different ideas for art and ho we were going to try to visualize and theme out the record. There were a couple of different titles for the album too that were bouncing back and forth. I think we were really close to going with “Did You Know”, that kind of related to going through traumatic experiences in life and in the moment, you’re focused on the pain or the heartbreak or the trauma but it was more about later in life when you realize that you were actually growing in those hard times.
So yeah, it came down to the title track “Beautiful Oblivion” having more of a unique ring to it. If you saw it somewhere you would know that it was an Issues album. But it is the same concept. When you’re going through those experiences you are growing.
We wrote the album more about sinking into a beautiful oblivion, this digital escape from the harsh reality and trying to centre and find yourself within that digital escape and then coming back to reality and being stronger.
Josh: The artwork too. We wanted it all to be tied in. If you look at the single artwork it is from the perspective of the person with hands all around them and suffocating them. Now that you’ve seen the full record version of the art, from that perspective you’re looking at the door.
Tyler: You’re escaping the grasp of society.

Q: A song we really liked is “Your Sake”, it really grasps you. Could you tell us something about what the track means to you guys?
Tyler: Yeah it’s just that everybody gets to a point in their life, hopefully not everybody has to experience it, but a lot of people get to a point in their life where they feel like they just can’t be what they’re expected to be at all times. Whether you’re an artist and you can’t live up to this perfection that everybody expects of you or whether you’re a child whose parents want them to be something perfect.
Especially if you’re not accepted, people feel lost, and the song is almost like an apology or this realization like “I wish I could be something else or someone else for you, but I can’t and I’m sorry. You’ll have to just accept me because I love myself more” and not in a vain way but more in a “I have to love myself to survive” kind of way.

Q: What’s the feedback been like so far?
Josh: I think the feedback is more positive than we expected. Obviously, when we released “Flexin”, we knew people would get up in arms about it. But we wanted to give the song a platform and we genuinely love it.
Tyler: It’s crazy because you listen to that song and it does fit perfectly into the halfway point of our album. Even though it is polarizing, it gives you a breath of fresh air, when you get to that point. We have these highs and lows on the record, we have R&B, a couple of love songs with a sexy feel and then a lot of emo songs but then “Flexin” serves as this intermission, not positive, not negative, let’s just have fun. Keeping it light-hearted.
Josh: Most of the record is pretty sad, so having songs like “Flexin”, it needs it.
Tyler: Even though it’s fun and groovy, technically it’s about being broke and being responsible. You want to have fun and buy things, but you also have to pay your rent and we think a lot of young people relate to that.
Josh: We especially relate to that because when you’re a musician, you don’t make a lot of money besides touring, so when we took so much time off to make the record and we started touring again, we wanted to just have fun, but we had to think about these things. We ended up using the exact vocal tracks from the demo that Tyler cut because it was so clear that he didn’t care and it was very difficult to replicate.

Q: Is it going to serve as an intermission on the road as well?
Tyler: Maybe! We’re still experimenting with how we want to roll out the new songs and where we want to place them in the set. Last show, there were a couple of moments in the set where we weren’t fully comfortable, so it is going to take some time. We’re starting to let our guard down a little bit more. We’re all getting older and people just want to see their favourite band just have fun.
Josh: Our discography and fan base are very diverse, but everyone comes to one room and we all sing the same songs.

Q: Did you used to be more nervous for the shows?
Josh: We’re still pretty calculated when we make sets, but now we’re just a little bit more laid back. We’re trying to adapt and feel this new stuff out.
Tyler: Sometimes you got to read the room and see what people want and make adjustments. It also depends on the tour we do and with what bands we tour with.

Q: What advice would you give to bands who are just at the start of their journey?
Tyler: Be different. Be influenced by your favourite bands but don’t replicate them. You don’t want to be a copy of them.
Josh: The hardest part is finding like-minded people. Be you! Don’t worry too much about what people think.
Tyler: Work hard! Practice all the time!