INTERVIEW: Bonnie Fraser (Stand Atlantic) About Wearing Your Heart On Your Sleeve, Band On Band Love And More 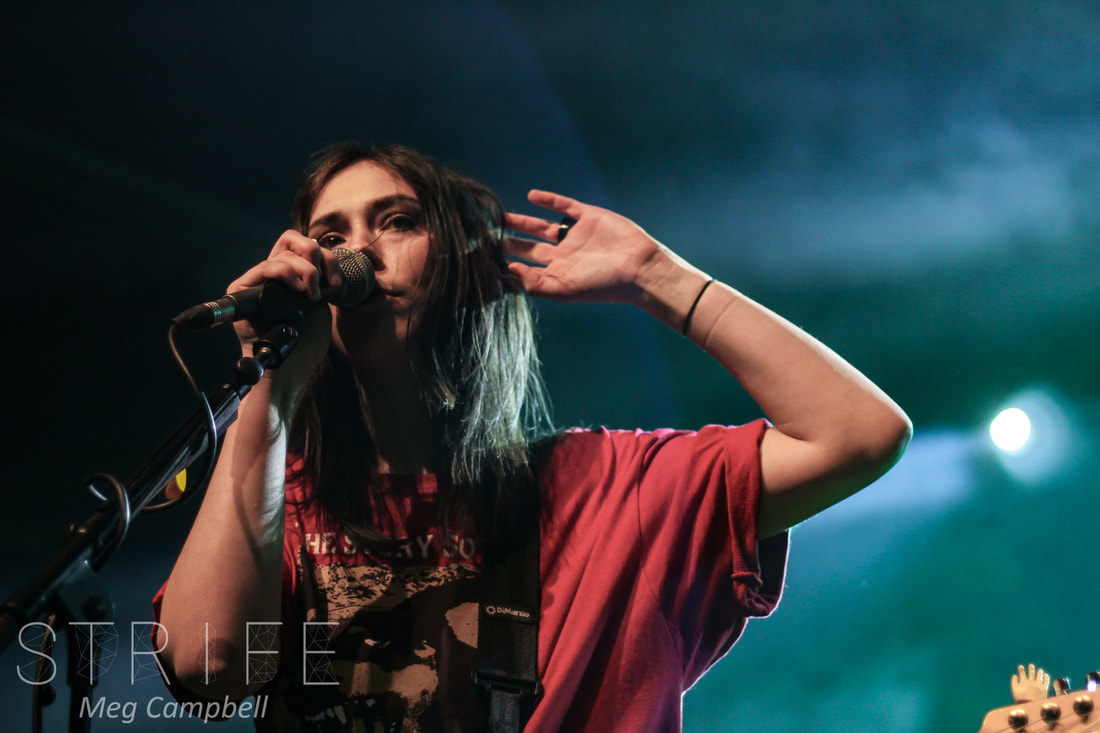 One would argue that one of the most interesting and definitely most vulnerable albums of the year is Stand Atlantic’s colourful debut record “Skinny Dipping”. The Australian trio around frontwoman Bonnie Fraser has made a stunning first impression on European crowds late last year while opening shows for ROAM.

Now, a year and a few select spring shows later, just in time for the release of “Skinny Dipping”, Stand Atlantic made their comeback to Europe, this time accompanying State Champs on their Living Proof Tour. We’ve taken the time to have a little chat with Bonnie about their debut album, honesty and vulnerability in songwriting, funny tour anecdotes and just what exactly sparked the loving Twitter relationship between Sammy from WSTR and Stand Atlantic.

Have a look at all of that and more below!


​
Did you get to check out the city [Hamburg] at all?
Not yet, I think after we play I‘m going to go and explore a bit. Last time we came here, there were Christmas markets, and it felt like the further into the Christmas market you got the weirder it got. By the end of it, there was a guy who was making like sex toys in his little stall, and there was a strip club at the end of it. We were like “what the fuck?!” It was so funny.

Yeah things tend to escalate quite a lot. So how did the tour go so far?
Very cool, it’s always nice like coming back to UK and Europe. The first time we came here was last year in November with ROAM. It‘s kind of cool to come back a year later and see how much the crowds have grown for us personally, if that makes sense? Like, we can tell more people know who we are and singing words back. Everyone is really nice and it‘s just the best.

You guys have been on tour with State Champs before, how does it feel to have the gang back together and be on the road with all these amazing bands?
It‘s really nice. I feel like with Galaxy Camp and the three little shows we did with them last time, we didn‘t get to hang out this much, whereas this one, I feel like we’ve got more time to properly make friends. It‘s really cool and the guys in Seaway are awesome, and we know Woes as well, so it‘s just like a big family.

You have released your debut album Skinny Dipping very recently. What’s the reaction been like so far?
Really good! People have been liking it which is nice. (Laughs.) It‘s always really scary releasing music in general, let alone a debut album. So, to have it be received as well as it has been… we couldn‘t have asked for anything better really. It‘s just a nice validation that we are doing the right thing.

A few months back, you have released a music video for the first single “Lavender Bones” which is beautiful, but very well thought out. Who came up with the concept and what was the initial idea behind it?
It was a mixture of myself, our manager and the director. Me and our manager had this idea of a basic skeleton, and then the director was like “Oh yeah, that‘s cool“. We all brainstormed going back and forth with ideas, so it was a really collaborative effort and then ended up being what it was.


How do you enjoy playing the new tracks live, got any favourites?
It‘s so good! It’s so much nicer than playing the other stuff. That gets a bit old after a while. I think I really like playing “Lost My Cool”, because there‘s a bridge with no vocals or anything. And for ages we would just kind of stand there awkwardly and play it, because it‘s pretty soft and subtle. But now we’ve been starting to get people to put their phone torches on, and it looks so sick! It’s never happened to us before, so we were just like “This is awesome!” So I’m really enjoying that now.

If you had to describe the record only using three adjectives, which ones would you pick?
Oh shit…dynamic, personal and enjoyable!

Speaking of the personal aspect of it, a lot of the songs are very personal and heartfelt. Was it daunting at all to work on them knowing thousands of people across the world would get to hear them?
Oh yeah! It‘s not so much daunting knowing that heaps of people are going to know, but more so with specific people that the songs are about. (Laughs.) But at the end of the day, you just kind of have to go “Fuck it, it‘s my life. Who cares? That person will know, and that‘s it.” It is scary though, very scary.

Did you ever get to that point where you were like “No I can’t share this, this is going too far”?
Almost, yeah. A couple lines I rewrote, because maybe they were a bit too brutal or just a bit too real. You just have to make these choices every now and again of how much of yourself you are putting into it. If you make it way too personal, there’s less chance someone else is going to connect to that situation as well, so I tried to like make it as personal as I could, while still hopefully being relatable to other people’s lives.

The artwork for the record is gorgeous by the way. Who came up with that and what was the initial thought behind it?
We had the title before we had the artwork. So I think the first thing that comes to your mind about “Skinny Dipping” is like naked swimming obviously. And me and our manager, we were just brainstorming ideas, and then we found this artist, her name is Aliza Razell. We knew we wanted to do something a little different and maybe a mix media kind of thing like photographs and watercolour, which is kind of what it is. And we found this chick online and she did really cool drawings over photographs, and kind of replaces parts with parts of actual drawings. We were just like “that’s perfect”, and it was really just a matter of a couple of skype calls, and then she did her thing. 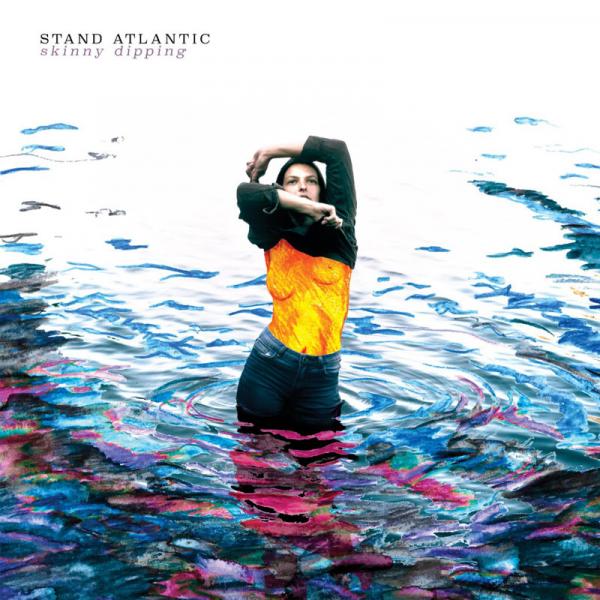 Let’s talk about #HanAtlantic aka your little collab with Hannah Greenwood (Creeper). How did that happen?
So basically we were friends online, because we were both fans of each other’s bands. Then we got to meet each other at Slam Dunk, and we all hung out and it was super nice. She‘s an amazing person. And then we just kept in contact like that.
We were tossing around ideas for a feature on the album, but we didn‘t want to do anything forced or disingenuous or anything like that. We wanted to make sure it’s organic, and then we were just like “Hey what about if we just ask Hannah if she’d like to feature on it? Why didn‘t we think of that earlier?” (Laughs.) I don’t know why.
So we asked her, and she just did it, and then she was on a couple of the dates for Neck Deep in the US, and we were just like “Come play a song with us”. But we hadn’t properly learned the song from the album yet live, so we couldn’t play that. So we were like “Come sing another song”, so yeah, we’re mates, and that’s how that happened I guess. (Laughs.) It was a lot of fun.

​You’ve already crossed paths with a lot of awesome bands. If you had to a bunch of bands to take along on your dream tour, who would you pick?
Just give me a minute. (Takes deep breath.) Freaking hell. The 1975, and for a throwback, blink-182, just because they’re the one.

What’s next for Stand Atlantic? You have your brand new album so it’s way too soon for new music, but what’s next for you guys?
Lots and lots of touring! We’re going back to some places we‘ve been to previously, and then there will be time for writing, but mainly just a lot of touring. I just want to meet as many people as we can and play for as many of new faces as possible.

Are there any particular places that you haven’t played yet, but dream of playing?
We still really want to do Japan really badly, so if anyone from Japan wants us to come, please just tell us, because we would love to go! But yeah, it’s obviously always really cool coming back to the UK and Europe. We will do the US again, I’m sure and yeah, just going everywhere basically.

Maybe some more festivals as well?
Yeah, we are playing an Australian festival called Unify, which is in January. Other than that, I’m not sure yet. I can’t give too much away…

Lastly, are there any limits to the love between Stand Atlantic and Sammy from WSTR?
No! Our love knows no bounds, very much in love. I don’t even know how it started! He just got drunk one night and tweeted really passionately about us and we were like “Alright, let’s just roll with this”. It’s been weeks now. (Laughs.)

Well, we’ll see how that ends… IF that ends.
It will never end! Love never dies. (Laughs.)

If you are curious about what it’s like to see Stand Atlantic live, check out our concert review of the recent State Champs tour they were on HERE.

You can also check out Stand Atlantic’s stunner of a debut record below!