LIVE REVIEW: An Exploration Of The Eerily Meaningful ‘Scaled And Icy’ Livestream 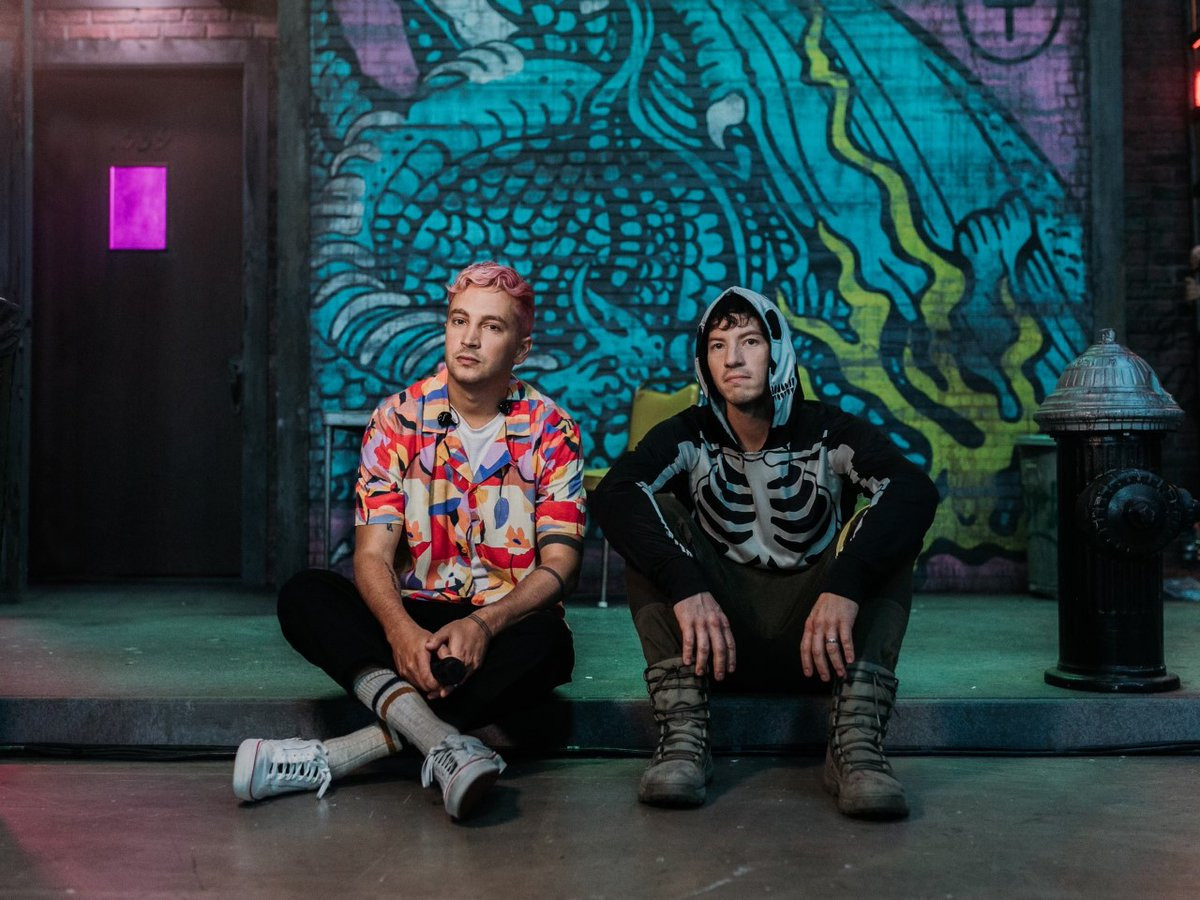 The ‘twenty one pilots Livestream Experience’ was nothing short of genius. For listeners, critics, and fans insistent that the album is just cliché, the stream has just proved them wrong.

‘Scaled and Icy’ brings a totally new sonic to the band, with very bright sounding songs and even brighter colours. However, the record isn’t all as cheery as it seems. The colourful and upbeat sound often masks much darker lyrical content. The album poses as propaganda for a fictional city, Dema, created by Tyler Joseph to depict his struggles with mental health. The idea of Dema revolves around the glorification of suicide, and a religion aiding this, run by nine bishops. Both ‘Blurryface’ and ‘Trench’ run this story, and ‘Scaled and Icy’ continues it. However, some fans and critics were quick to share their dislike to the record, without fully appreciating the meaning and narrative behind it. This is where the livestream helps to explain the story to those who didn’t quite understand.

After a three-hour pre-show of old tour footage and album content, the stream opened with an animated intro-sequence reminiscent of famous breakfast TV shows. This introduces a fictional programme titled, ‘Good Day Dema’, immediately hinting to the propaganda elements of the album. The introduction is backed by the opening track of the album, ‘Good Day’. We are then introduced to the show’s hosts, Dan and Sally, whose real identity becomes clear later in the concert. Whilst the hosts are enthusiastically chatting away, Tyler sits in-between them looking very uneasy. Sally’s voice becomes eerily processed after she asks for a performance, and whilst looking directly into the camera, Tyler starts to sing ‘Choker’, totally alone and unaccompanied. With the hosts frozen in time, the set moves away, revealing Josh Dun and ‘Trash the Dragon’ in front of a very colourful set. Now accompanied by Dun and backing tracks, Tyler nearly completes the song, until it cuts before the ending with a spotlight showing Tyler being dragged away by dancing bishops.

Then begins a remixed version of ‘Stressed Out’, on a new stage. The group of bishops follow Tyler to the performance and accompany him in dance. These aren’t believed to be the real nine bishops, but just indoctrinated residents of Dema representing them. The setlist then cleanly blends together ‘Migraine’, ‘Morph’, and then ‘Holding on to You’. However, the latter is suddenly cut, just before the drop, bringing us back to Sally and Dan who are now heavily promoting the new album, and stressing its vibrance and ‘saturation’. Sally even states, ‘Dema is bringing you this new music collection’, which strongly emphasises the idea of the record being propaganda.

We then move to yet another new set, this time a bar. This is where Tyler begins to play ‘Mulberry Street’, a song about feeling out of place, fittingly implying he feels out of place in Dema and recognising that it isn’t his real home. As Tyler moves out of the bar, we are shown a street, ladened with references. Josh Dun is drumming, whilst surrounded by people frozen in time. The song then closes with synchronised choreography, and cuts to a very disorientating and uneasy feeling shot of the two hosts, now wearing masks. In the background we hear letters from the character ‘Clancy’ being read aloud, which blends with the introduction to ‘Lane Boy’, which is then performed with a large band accompanying. Tyler then blends the lyrics of ‘Lane Boy’ with ‘Redecorate’, with emphasis on the line, ‘scaled back and isolated’ – a reference to the album’s title. ‘Chlorine’ is played next, with bright and colourful lighting and a great performance.

Tyler and Josh then walk into yet another set to perform the lead single, ‘Shy Away’. The big band are now seen performing in a snowy mountain range, with a large dining table in the centre. This is quite possibly a reference to the album’s title, and almost definitely a part of the narrative that we haven’t understood yet. Tyler’s intense but brilliant scream steals the show with this performance. Once again, we cut to the hosts, who are now looking slightly worn and beaten. They both have smears of blood on their clothes, and what looks to be areas on their faces where their makeup is wearing. Sally and Dan try desperately and slightly aggressively to sell the album in an over-exaggerated sense of positivity. Sally then looks directly into the lens and eerily says, ‘but remember, you should’ and then the shot cuts. We will probably never know what she was saying, but it feels as if the band are battling to protect fans from Dema’s indoctrination. We are then brought back to the street, as we watch another choreographed performance, this time of the song, ‘The Outside’. Next, we are shown another new set, Tyler in a boat, with a backdrop of a starry sky. This is seen to represent the fans at concerts and emphasises Tyler’s isolation. He plays songs ‘Heathens’ and ‘Trees’ with just himself and a ukulele. This is quite possibly the most stunning moment of the whole show.

The band then perform, ‘Jumpsuit’ and ‘Heavydirtysoul’, which are both songs exposing Dema and the bishops. Before they are fully exposed, Dema then cut the show back to the hosts. This time they are clearly and visibly beaten up. This is where their true identities were revealed. Dan Lisden and Sally Sacarver, both of whom are bishops in Dema. Their eyes are devilishly red, and their clothes and face scarily worn. They then say, ‘We’ve come for you, we’ve got people on the way. No chances.’ This of course is hinting at the lyrics of the song, ‘No Chances’ and proves it is the bishops singing to Tyler. This scene concludes that the exaggerated positivity from the hosts was just their way of masking their identity. It also shows that the whole concert and album is being controlled by the bishops and assists at the theory of the album being propaganda.

After eccentric performances of ‘Saturday’, ‘Level of Concern’ and a cameo from Tyler’s wife Jenna, the band play ‘Ride’. The song is swiftly followed by, ‘Car Radio’, with just Tyler and Josh. As the song ends, red lights flash and loud alarms sound. Panic is apparent, as everyone is running frantically away from something. Everyone except Tyler, who is calmly walking amidst the chaos, into the street, now featuring the burning car from ‘Heavydirtysoul’ and ‘Jumpsuit’. The band closes the set in the street with ‘Never Take It’, a song about not conforming and potentially referencing Dema. It is an act of rebellion. After an unexpected guitar solo and a shot of the dragon on the floor, Tyler begrudgingly and lonelily walks back into the ‘Good Day Dema’ set and again sits in-between the hosts, or now as we know them, bishops. Whilst staring dead into the camera, Tyler finishes ‘Choker’ and on his own again. He closes the show with the line, ‘nobodies coming for me’. This clearly proves his isolation in the battle against Dema.

The show can be seen as Tyler fantasising an escape from Dema but being stopped every time by the bishops. We see him lose this attempt at the end of the show. To me, this show gave everyone clarity on the true meaning of ‘Scaled and Icy’. It isn’t just a ‘pop record’ conforming to popularity and cliché. It is an item of propaganda for a fictional city. Yet the fiction becomes reality when you realise that the whole narrative is just one big metaphor for Tyler’s battle with his mental health. This concert suggests he is losing. The band are sadly just one of few who have the courage to speak out about mental illness, and the narrative has comforted many fans, and reassured them they are not alone in their battles. With the crisis of mental health on the rise, the importance of awareness is becoming ever more important.

So, although it may not seem it, ‘Scaled and Icy’ and the stream that accompanies it is very meaningful. More meaningful than many will ever realise. That is why to me this album is genius, and I wish everyone could see it this way.