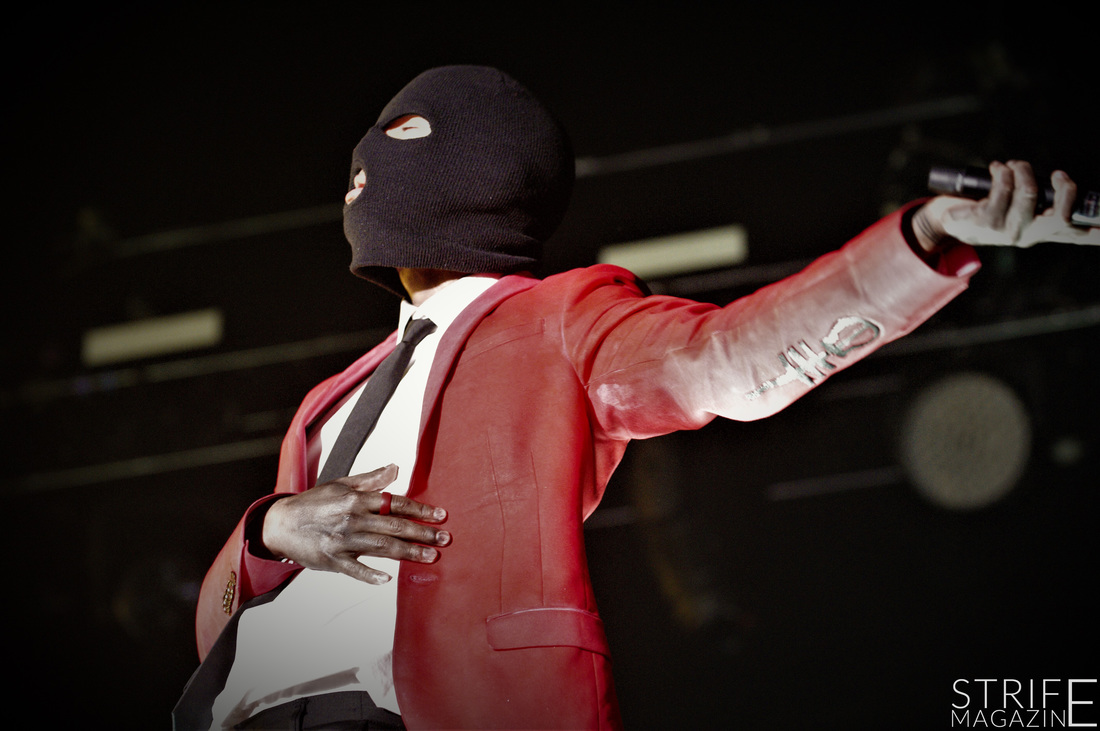 Here at Strife Magazine, we’ve absolutely thrashed Twenty One Pilots’ Blurryface album. By now we know it inside out and back-to-front. We’ve been to the Twenty One Pilots shows as part of their Emotional Roadshow [Amsterdam photo review here / London concert review here]. We’ve watched and listened to endless amounts of live shows as well as video.

So when Twenty One Pilots revealed that they were putting out a live, 3-record vinyl album, I was excited, but I honestly wondered if it wasn’t what we’d already enjoyed before? I wanted a ‘friend’ in my collection for my clear Vessel vinyl, so I decided to appease my curiosity and get my hands on the Blurryface Live vinyl.

Guys, we need to talk about this.

Firstly, the cover. When I opened the box that Blurryface Live came in, the first thing I saw was the sole of one of Tyler Joseph’s Vans. I was instantly thrown into the memory of the bridge of Heavydirtysoul, where Tyler collapses backward to the ground. In the (full) photo if you squint you can see a tamborine in hand.

That one photo, and that one moment, in that one song, communicates such a dedication to the craft that I was already in “Wow” mode.

I turned the album over and there on the front cover were ‘our boys’ on stage, with the title above them:  Twenty One Pilots – Blurryface Live. With Josh sitting behind his drums, biting his bottom lip and Tyler in kimono/uke/white glasses up front at a microphone.

When you open the cardboard folds, it launches a soundbite. Which is also a kind of ‘Try Not To Bawl Your F*cking Eyes Out Challenge’. It’s unmistakeably Tyler, speaking candidly about the “new drummer Josh”. I remember seeing the video where he’s saying this. He’s driving and being filmed and the tension is palpable. He goes on to say how frustrating how small and “insignificant” Twenty One Pilots is as a band, at that moment.

But that soundbite morphs into the chant of a big crowd, chanting for their band:  T-O-P!  T-O-P!

That chant, combined with the picture on the second fold of Tyler and Josh and their drums on the crowd, with the red confetti at the end of Trees, well, it’s enough to turn a Clique member into mush comprised of pride, joy, and gratitude.

And it gets ‘worse’.

With both album folds open, it’s a wide photo, in red and black, showing Tyler & Josh in arms together, and a crowd in front of them. “We’re Twenty One Pilots, and so are you.”

This is repeated in text on the credits also (I’ll leave that moment for you to have on your own).

It’s apparent that this is not an album to sell records or make money. It’s a thank you gift to the Clique, and to everyone that believed in the band from the beginning, or continues to believe in them now and into the future. And just like every other creation we’ve been given by Twenty One Pilots, it has been made with thought and attention to detail.

Maybe we should look at the actual vinyl, hey?

Despite looking way better in person than in my photos, the matt sleeves for the vinyl are gorgeous. There’s no plain white sleeves in sight. Look: 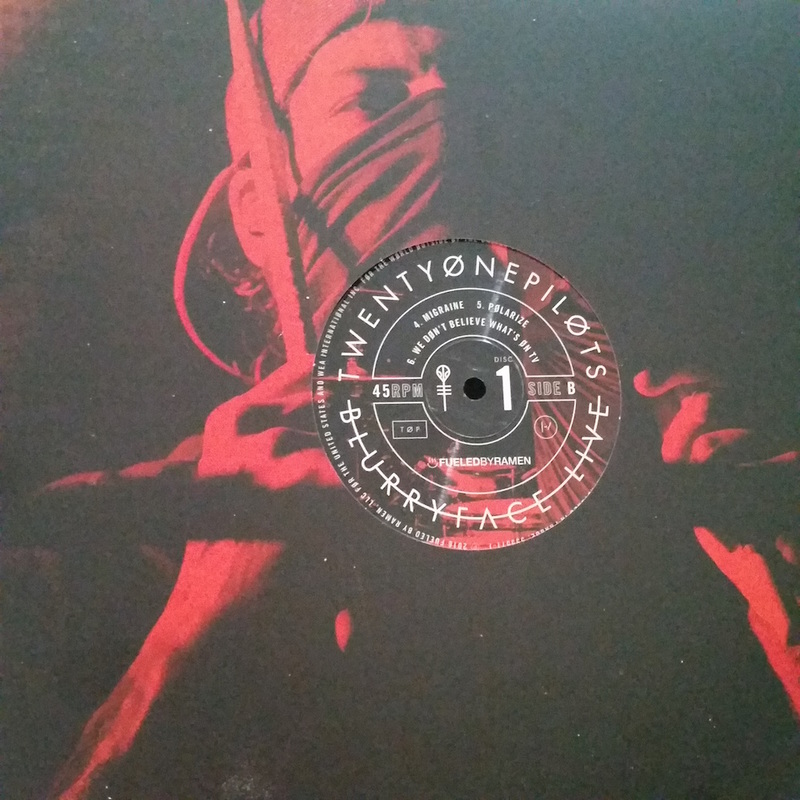 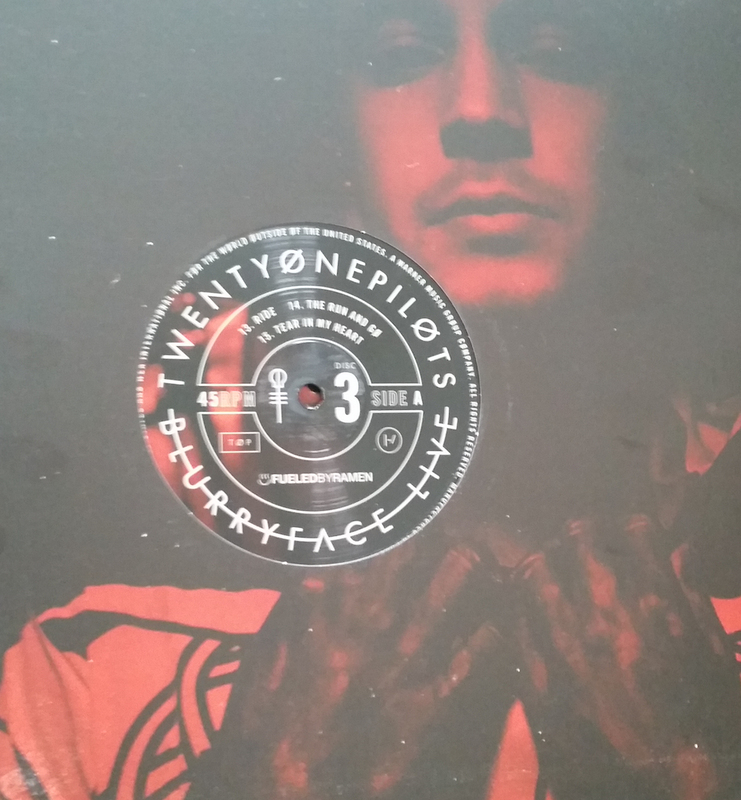 It’s all so beautifully done, and something really special for fans of the band and also fans of Tyler and Josh. With the three records, visually speaking, there’s a Josh record (1), a Twenty One Pilots record (2), and a Tyler record (3), where both the sleeve and the vinyl itself have pictures of either one of the guys on their own or the two together.

The photos printed to vinyl are just amazing. 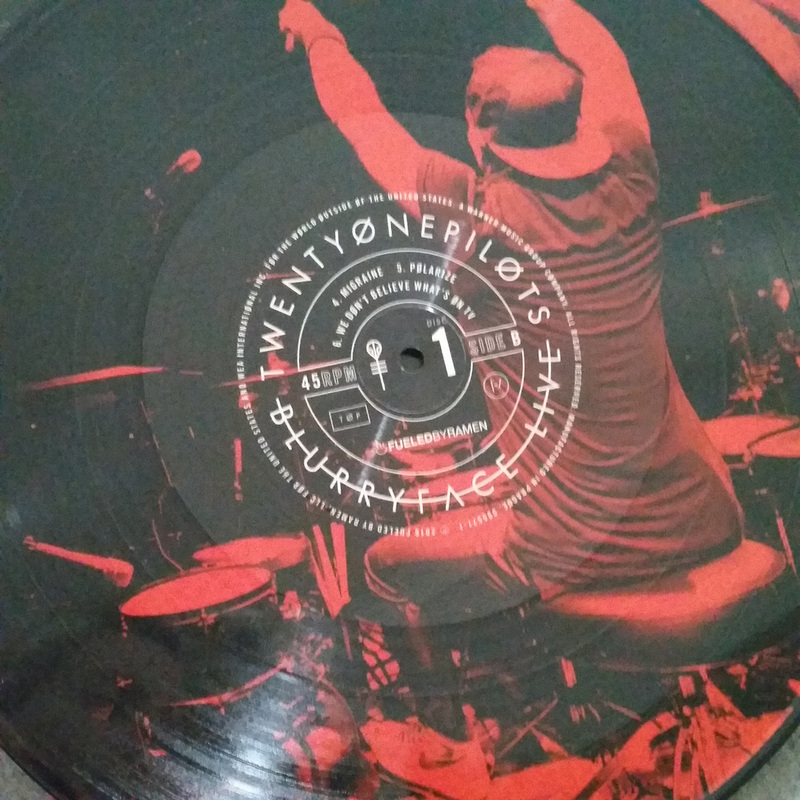 So – what about the actual music? I’m getting there.

I put the first record on, and instantly with the bass hum leading in to Heavydirtysoul, I was as good as there. If I ever get sad about not getting to see Twenty One Pilots in concert, every day of my life? THIS is the album I will put on.

The screams of the crowd take you there. Even if you’ve never seen Twenty One Pilots live, you can feel the excitement of the crowd. You can sing out with them in the parts where Tyler clearly points the microphone at you to shout things like: “SOMETIMES DEATH SEEMS BETTER THAN THE MIGRAINE IN MY HEAD!”

You can hear when they’re setting up for Josh’s drum island. You can hear all these signature Twenty One Pilots things, and the crowd’s reactions, and it is exciting to be part of again. You get to hear Tyler talking with ‘you’, and telling you which is his Dad’s favourite song.

The three-record album has:

It is so true, that WE are all Twenty One Pilots, and this album is one way they can communicate that, how the power of the crowd combined with the boys playing, makes such an amazing experience, and how we can ALL hold each other up.

We’ve loved Blurryface Live so much that we want to give one lucky Strife Family member the opportunity to have their very own copy. YES, we are doing a giveaway of Blurryface Live vinyl!

To enter, here’s what you have to do: