Album Review: Memphis May Fire – This Light I Hold 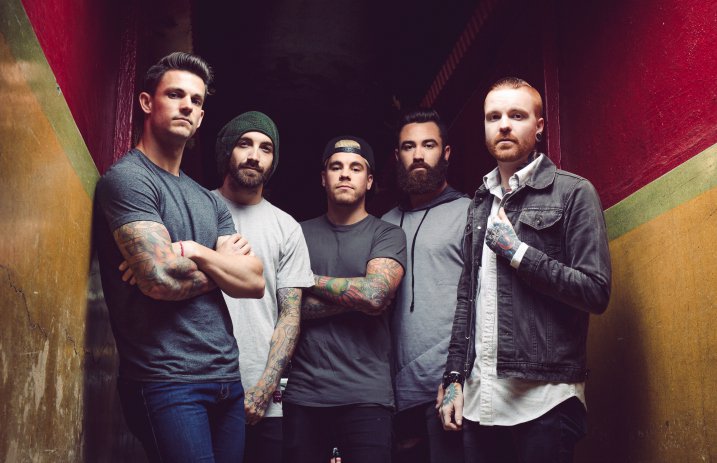 If you know metalcore, you know Memphis May Fire — the band formed in Texas in 2006. Currently with a line-up consisting of Matty Mullins, Kellen McGregor, Jake Garland, Cory Elder, and Anthony Sepe they created ‘This Light I Hold’, their newest album which released this October.  Sticking to the status quo, the band released this work with familiar lyrics and familiar music.  Being a band often mentioned along with other big names, they are taking the path less traveled: to stay about the same.  While other popular bands in this genre have wildly changed their agendas and are owning new sounds, Memphis May Fire have developed their skills without varying their genre.

​Matty Mullins delivers mostly clear lines that speak to a theme almost anyone can relate to.  Tracks like “Out of It” are heavy and hard hitting, but not too loud that it overpowers the lyrics.  There are even clean vocals and slow, quiet breaks thrown in to give contrast to the screams. If you are stuck in a hard place inside your mind, this track will remind you of yourself. The track is followed by “Carry On”, which pulls you in with beautiful guitar riffs and skillful drum work.  It’s anthemic lyrics remind you to, that’s right, carry on.  This song is truly Memphis May Fire, and Mullin’s voice rings through the foot-tapping beat.

“Consume, consume, consume until it consumes us” is a line that hits you in the track “Wanting More”.  This song starts off with a melody that revs you up for some screams and then afterwards drops you onto a piano and a marching band-like beat.  To change it up, “Sever the Ties” goes right into screaming and a hostile tone.  Following it, “The Enemy” is the shining star on this album, featuring amazing guitar work held down by equally terrific drumming.  The lyrical form is unique from the other tracks and even simmers down towards the end to bring serious emotion.

The title track lies right in the middle of the tracklist, perfectly describing the underlying tone of the album: people will attack you and leave you when you have opinions and goals, but you need to keep moving and finish what you’ve started.  Mullins encourages us with the words “This light I hold will glow”.  Lighter guitar picking and strumming of chords is glazed with Mullin’s softer vocals in the next track, “That’s Just Life”.  This song will appeal to those who enjoy the light and emotional side of Memphis May Fire.  The lyrics almost question the rest of the album’s tone of fighting tooth and nail to get through; instead he sings, “Do I raise my fists and curse up at the sky, or do I close my eyes and realize that’s just life?”

Not going right back into heavy, but not staying completely soft either, the next track “Letting Go” delivers a hopeful account to an otherwise sad story.  The drums and vocals dominate this track even without a heavy presence of unclean lines.  That is turned upside down by the sudden heavy start and continually heavy feel of “The Antidote”.  A staticky guitar noise followed by sturdy drums leads us into Mullin’s vocals about grasping for a better future after a harrowing past in “Better Things”.  The same sound and tone lies in “Not Over Yet”, but the attention is turned to a third person perspective in the lyrics.

Transported into a circus, the band plays “Unashamed”.  Not only does the intro remind you of freaky creatures and ringmaster, the lyrics speak of chaos and confusion.  Everyone around them is so misguided, they should be ashamed.  The last track, “Live it Well”, winds down the album with age-old questions that everyone asks themselves.  All of these questions are left unanswered, open-ended, just as in reality when we struggle to live our lives well.  Each band member is able to show off their best in this track, wrapping up the album.

Fans who love the honest Memphis May Fire will not be disappointed with this album. They once again brought their feel and sound and at the same time improved upon their skills.  While the lyrics could have been more profound, they succeed in driving home a clear message that can touch everyone.  The album brings enough variety that anyone could find a track they enjoy, but still holds an overall tone.  At the end, they sum up their album with a speech: “Absolutely top of the list, you have to love yourself also, because if you can love yourself, then you can love others.”