Interview: The Departure And Return Of CJ, Writing And Recording & More With Thy Art Is Murder 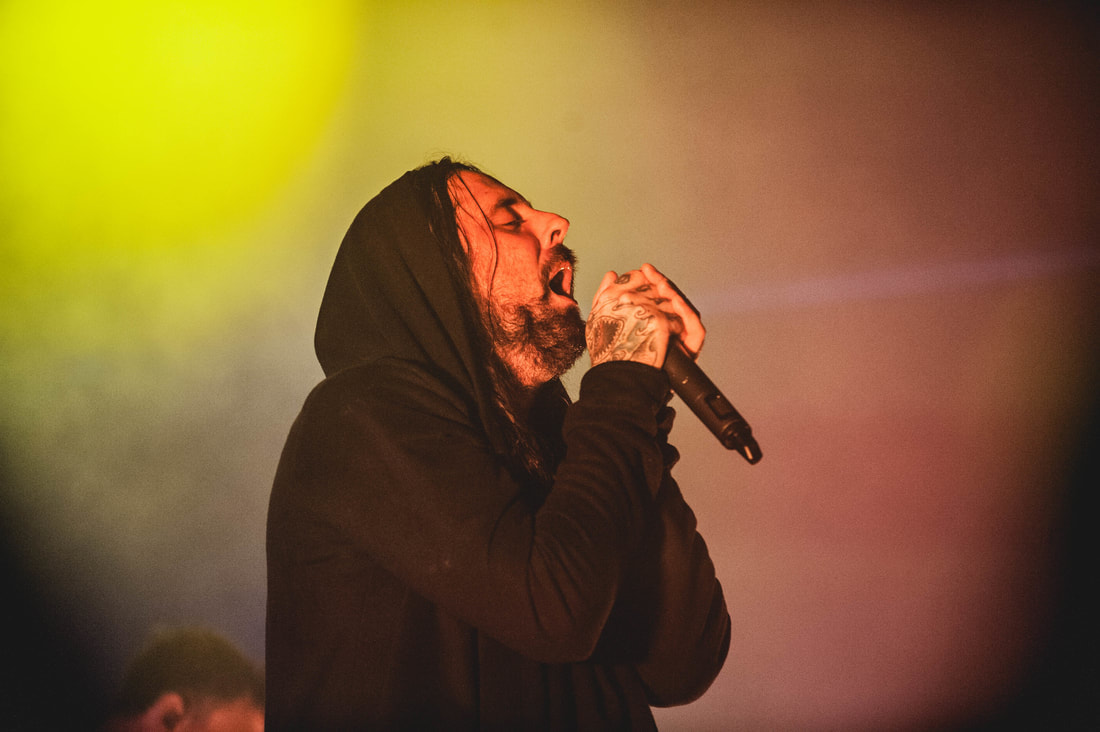 While on the road, promoting the release of their latest record ‘Dear Desolation’, we caught up with Andy Marsh, who is responsible for all the band’s lyrical content.
Among other things, we discussed the creative process of this record and how it differed from previous album processes, given the most of the record was written when the band had no frontman.
Just prior to the band’s performance, Andy Marsh gave us the in and outs of everything Thy Art Is Murder and you can read all about it below. 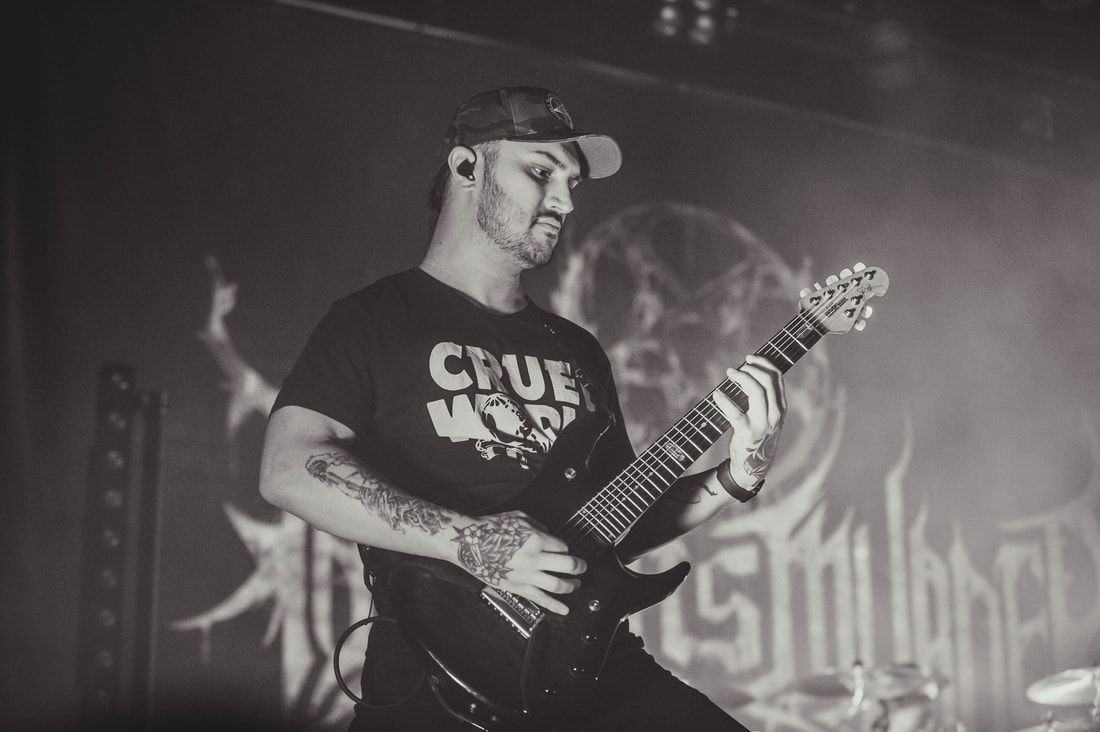 How are you?
Good! I have a great day.
I just got myself some relax time, walked around Haarlem a little bit. We’ve been here 3 times now, but the weather was a bit shitty, otherwise I would’ve ridden my bike to Amsterdam and back, so yeah that didn’t happen.

How has the tour been so far?
The tour has been amazing! 10 sold out shows or more, it’s been a really great tour.

How was the writing and recording for this album?
Nothing exciting or new, honestly. We were on tour here a little less than a year ago. We wrote a lot of music on the road at that time, Sean did the same, and we said when we would get together, we’d start working on new music.
So once we got together, we just said “uhh, we’ll do it tomorrow”, and we’ve been doing that every day.
So when we got to the studio, we found out our producer had to go away for a few weeks to produce another record, so we just hung out at the bar and got drunk everyday. When we found out he was coming back, we wrote like the entire rest of the record in two days.

Have you been writing on the road as well?
We were writing when we were off the road, we only write new music off the road, but due to us living in other continents, we come together and work on the music we both wrote.

Has the departure of CJ had a big impact on the creating of the album?
Not at all, creatively speaking we just write the music we like writing. We don’t really think about who’s going to sing the lyrics. I write the lyrics, but other than that it doesn’t make the creative process any different.

​Why did you decide to not put “No Absolution” on the record?
Because we wrote this song, some of the song, 7 years ago. The breakdown sequence at the end for example, came together 7 years back. The rest of the track was also written earlier. We recorded it during the “Holy War” session, without having lyrics for it.
We actually have another song as well, which never got released. We had the entire song finished, but we didn’t have any lyrics for it. Considering all this, it just made sense to make this a stand-alone single. It’s been finished over many years, it didn’t belong on “Holy War”, that’s why we never finished it and for the same reason it doesn’t belong on the new record. It wasn’t written with the same spirit.

You also had a new track for the “Depression Sessions”, was that also recorded at that time?
No, that one was recorded by itself. That one and the “Du Hast” cover by Rammstein we recorded in December, 2015.

How did that happen?
Will, who produces our band, also produces Fit For An Autopsy, he sings and does the guitar in the band, we’re very good friends with him and we talked about how great it would be to do a split with them, which doesn’t get done in metal very often. We both come from hardcore backgrounds.
So, we thought i’d be cool to do something hardcore in a metal world. So each band would make a cover and a new original song, and he was working with The Acacia Strain and it came up in conversation, and they were like, we really want to do this, too. So, it became a 3-way split EP! We all finished our touring schedule somewhere in December of 2015, and once we realised that this timing was actually perfect, we would just all meet up in the studio and all be there at the same time and record the songs. It was a community kinda and really fun thing to do.

What about “Du Hast”?
We really like playing shows in Europe and most of our shows we play in Europe are in Germany. We go there a lot, I probably spent like 1 year from my life in the last 5 years in Germany. A lot of our friends are from Germany, so we just spent a lot of time in that country, so we kinda wanted to do something from Germany. Du Hast is kind of the only thing people in the metal world relate to that country, so we thought that we should do that one.
It’s crazy, the entire scene is so massive in Germany. They have a great booking company, and of course Impericon is from Germany. I think they’re in great touch of the scene, which kinda made the scene there expand the way it did. The Netherlands are great, but it’s nowhere as big as Germany.

What’s next for Thy Art?
Well, we finish our tour soon, we’ll have two days off, then we play a show in Israel, then we fly to Germany, then we fly to South Africa, and then we fly to Johannesburg and then everyone goes home for the rest of the year.
In Jan/Feb,. we’ll go on tour in Asia. Then we tour Australia after that with Emmure, and after that we’ll work on it. We have plans until almost 2020 at this point, but they’re all kinda loose plans, but honestly, a lot of touring is happening. Maybe another split with Fit For An Autopsy.

Are you already thinking about new music?
Oh, hell no. We haven’t even been home since the record came out, so no not yet. Maybe after the split, we’ll start thinking about a new record. 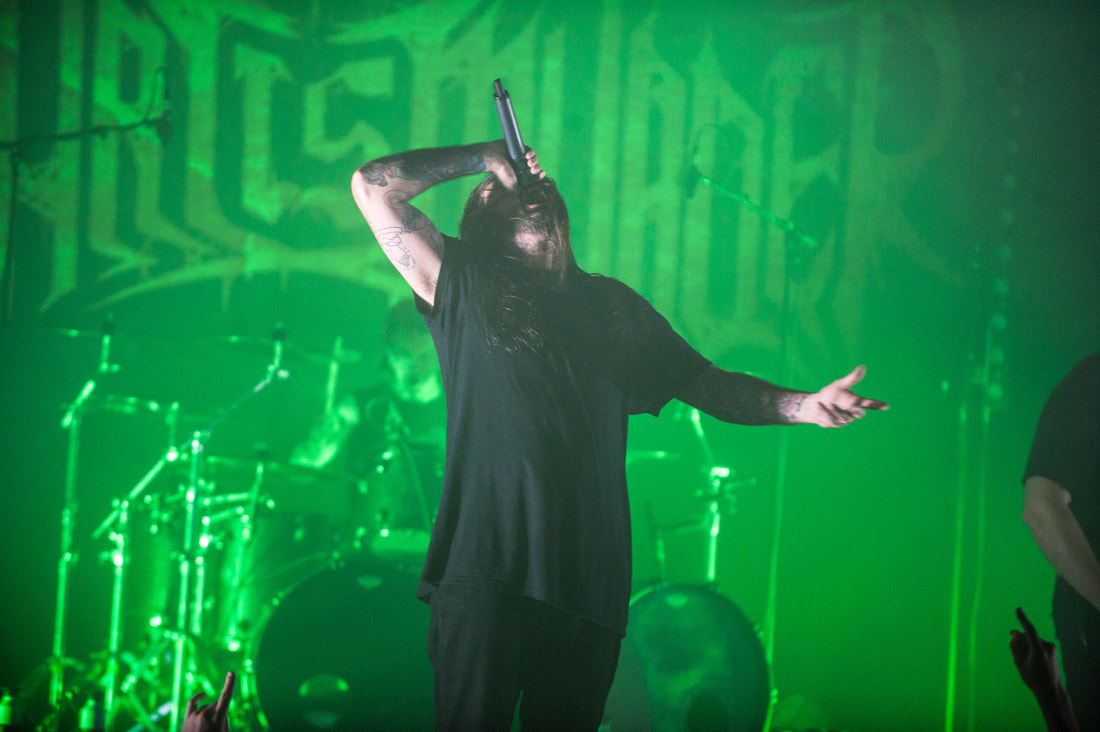 ​You were the first extreme metal band to ever reach the top 40 of the ARIA charts, how did this feel?
Pretty cool! Actually, we’re the highest charting metal band of all times now. We’re currently at 5 with the new record. For us, it’s kinda cool, but at the same time it doesn’t mean the same as 20 years ago. Record sales are terrible at the moment, but it does feel amazing to be recognized. Most importantly, I think it’s really important for our friends and family. They don’t know this music, so for them to see it on TV, papers and magazines, it makes it legitimate to them and that’s a good feeling.

In February 2014 you were taken off the Soundwave Festival, because promoter AJ Maddah twisted the words in the speech CJ gave, asking the fans to get onstage during the set. However, fans stood up for you and released footage of the actual speech, which made Triple J radio host Lochlan Watt defend you on a radio show and you got to play the remainder of the show anyway. This was all because of your fans, how does this make you feel?
It wasn’t just the fans, it was also friends from other bands. They said they would drop out if they didn’t put us back on,.. and they were in very big bands. IT was really nice to see our fans standing up for us like that, but it’s also very encouraging to see how our peers and friends and bands you look up to respect you enough to put their position on the line, cause you know, if they don’t play, they don’t get paid. They were willing to do this to help us and that means a lot.

2014 was a busy year for you. How did you cope and did it ever take its toll on you?
I think I coped pretty well. Some people struggle though, either mentally/emotionally or physically. They are gone from home so they don’t see their girlfriends, friends, family etc.
For me, it’s all about keeping busy. Keeping active and encouraging to have a strong mind, cause if you do that, you can do anything. That particular year, we toured for 9 months without stopping or going home, and we did make a record in between. So, it did cost me a relationship of 10 years, but otherwise, I got out kinda unscafed.

What is the situation between you and Suicide Silence right now?
Ohh, I don’t really care about that.
We like to draw attention to ourselves in a positive way, not a negative way, that’s not the way to do it imo. We were focussing on making our own record and they just kinda wanted to tease us, I guess because other people were teasing them, and I don’t think that’s the right way to deal with it, so yeah, I don’t really care about that. We did make a red hat out of it though, that was pretty funny. We try to make a light out of the situation, and that just made them more upset, they’ll get over it eventually.

Do you have any advice for bands who are just starting out?
Sure! Quit now! GO to school, get  a job, never do what I do… BUT if you decide that this is really what you wanna do, I’d say: Don’t care about social media, don’t worry about having scrims and backdrops and fancy things on stage. Focus on saving all your money, so when the moment comes you can do it well and invest in yourself. Focus on writing good songs, and be authentic, because if you’re doing what is trendy, because everyday you’re going to be one day behind the trend.. so focus on being authentic and stay true to yourself. Save your money, because the best investment isn’t equipment, it’s investing in yourself.