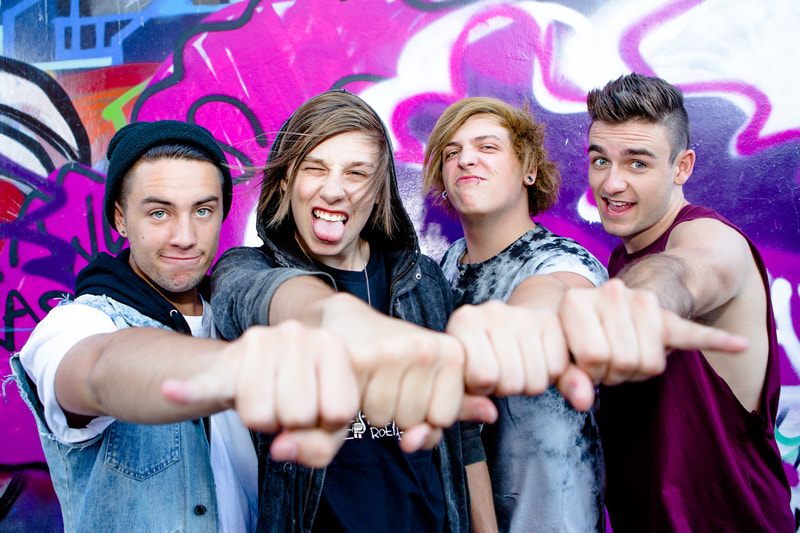 Sydney pop-punk band Forever Ends Here is hitting the road for one last time to say goodbye to the fans they’ve picked up over the past six years.

Their FEH-well tour sees them playing four shows across the country early next year, finishing where it all began – in Sydney.

Since the band’s inception in 2011, Forever Ends Here – featuring brothers Luke (vocals/guitar) and Kane McChesney (drums), Mav Burnett (bass) and Arran Barker (guitar) – has had a solid career run. They’ve had their own headline tours, supported the likes of Tonight Alive, Short Stack, Neck Deep and Simple Plan, and have built a strong fan base on social media.
​
After six years, three EPs and one album, Forever Ends Here have announced that they will in fact, end here. 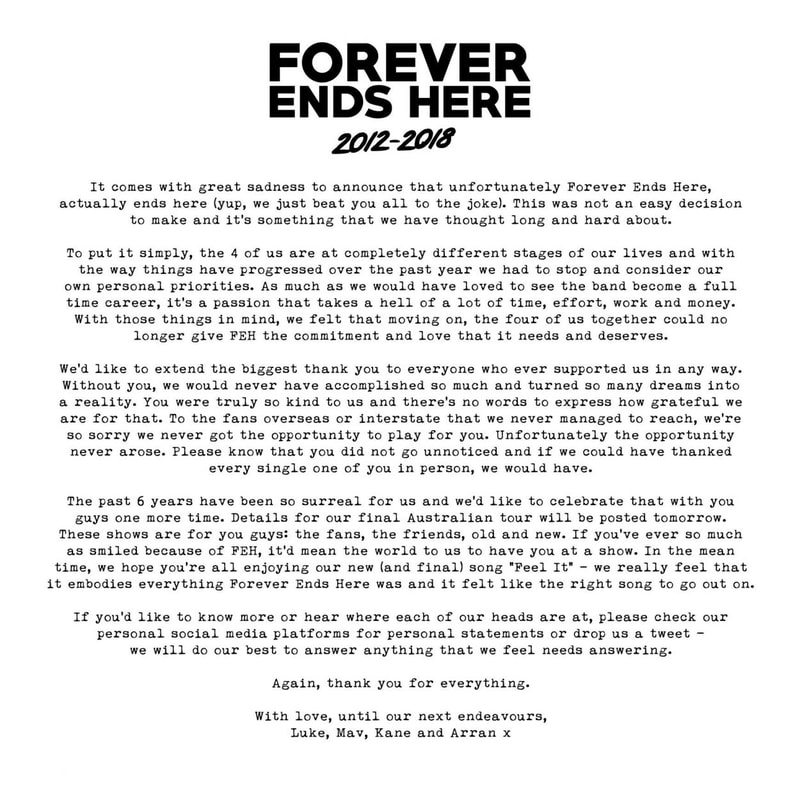 ​Strife Magazine caught up with vocalist and guitarist Luke McChesney ahead of the FEH-well tour to discuss the band’s legacy and what’s in store for the final shows.

​“We were recording our final single Feel It, and we were all struggling to find the time to be in the studio at the same time and people had other things going on in their lives. We just realised that there weren’t many tours rolling through at the time, and there wasn’t a lot for us to continue doing, and we didn’t want to be stuck in a situation where we would just release a song once a year and not see it go anywhere.”

He sees Feel It is the most adequate end-stop to Forever Ends Here because it truly captures all elements of their genre.
​
“It’s got that boppy pop-punk feel that we had back in the day. The lyrics are steering more towards the stuff we were writing recently. It’s just a cool vibe-y song. As a whole, I think it really captures the right energy and everything that the band was always about.”

​“I think FEH definitely exceeded our expectations by far. We never once would have seen ourselves touring the country with Simple Plan or doing headline shows that were selling out across the country. We were completely taken by surprise and it was an amazing six years,” McChesney said.

“There’s one day in particular I that I remember,” McChesney said of the day he realised just how big Forever Ends Here was becoming. “It was back in 2014. We had just done our I Believe tour and we organised an acoustic meet and greet in a park in Melbourne. I still remember showing up thinking there might be 50 to 100 people there, and when we arrived there were about 400 people waiting in the park to meet us. I think that was the most surreal day. We couldn’t really believe that that many people wanted to just come to a park and hang out with us. That was definitely the day where we were like, ‘Wow, we’re getting a lot more attention that we realised.'”

“[Being a member of FEH] has been incredible and very humbling. The other boys around me have always been amazing. It’s like having a second little family to tour the country with and always be with you. You’ve got best mates to fall back on all the time, and it’s like having an extended family having the fans there as well.”

“Releasing Imagine This was probably my proudest moment,” he said. “Having a full-length album out was something that I never dreamed would actually come true, so that was really cool.”

The group have so much planned for the FEH-well tour and are still working on new ideas. The band really wants to get fans involved… calling out for feedback on the songs they want played. They’re definitely going to be performing a lot of their old songs.
​
On top of this, they have some very special guests lined up who will be joining FEH on stage. They won’t say who, only that they’re performers who were really active in the industry a couple of years ago.
​