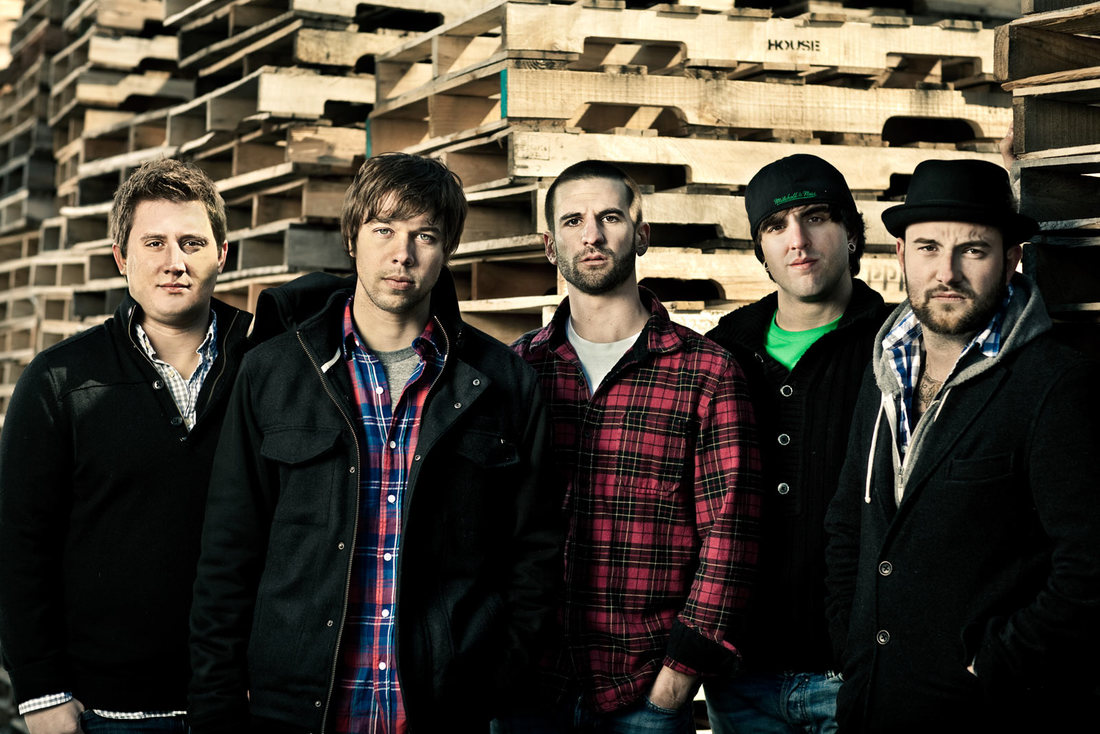 We’ve heard this story about how you got your band name. Is that true?
About the dog getting burned? Yeah, it’s true. Pretty crazy.
​
Have you ever thought about changing it and how do you feel knowing that your band name is linked with such an awful event?
Yeah, it is sad and a terrible thing. But to change our name now would be pretty crazy, I think. I mean we’re 14 years in and there’s definitely no thought of changing the band name. I understand where you’re coming from, but we’re not changing it. (Laughs.)

You guys are touring in promotion of your album “Messengers” right now, but your new record is also coming soon. What has it been like touring with the focus on the old record?
It was fun for a long time, but I can tell you, now that the new record has been announced and we’re starting to practice some new songs, I am anxious to play the new songs more than I am excited about playing these old songs. It’s cool that people respond so positively to a record like “Messengers” and that they’re eager to come out and see us play it live. That aspect is a lot of fun. But I guess the artist side of us is more excited about what we have coming out than revisiting this older album. It’s been fun though, especially the pretty extensive tour we did of it in the US, like maybe 40 shows or something, earlier this year before we recorded the new record. So now that the new record is done, we’re doing another bunch of shows here in Europe playing “Messengers”, but our head is looking towards the future rather than the past at the moment.

You’re playing “Messengers” front to back. Will there also be other songs in the set or just the record?
We’re playing the record and then we do like a mini set encore as well. So there’s more than just “Messengers”, including our new song.

Speaking of new music, are there going to be more European shows with the focus on that new record?
Absolutely. We want to hit Europe a lot next year and we have one tour planned already. It’s not announced yet, but we have one tour ready to go and we’d like to come to Europe twice next year if possible, so you might be seeing a lot of us around here in the next year.

Your new song “Invisible Enemy” is doing quite well, it’s on the top of your Spotify already. Can you tell us more about this particular song?
Sure! “Invisible Enemy” was a song that I wrote the music to and I wanted to write a heavy song that’s sort of more focused on the rhythm side of things. I’d been listening to the band Animals As Leaders a lot, they’re a pretty instrumental metal band and I really love them. They are way better musicians than I am, but I like the sounds they make and the stuff they do and I was inspired by some of the stuff they do and I kind of wanted to do my own thing with that. And then the second half of the song, like that bridge section and that big lead at the end, I would say we were inspired by a band called Galactic Empire, who are friends of ours and it’s a progressive metal Star Wars cover band, so they basically take the Star Wars soundtrack and turn it into these epic progressive metal songs and they have really cool melodies and stuff. I’ve been listening to them a lot as well and that kind of seeped into “Invisible Enemy”.

What can you tell us about the music video for the track? It’s quite unique.
Yeah, we’ve been a band for a long time and have done a lot of music videos over the years and we wanted to do something that was just different for us and maybe for metal in general. I mean there’s a lot of clichés when you look at metal music videos, you know you have bands playing in warehouses and live videos and we’ve done all these things already, so we thought we would kind of poke fun at that while doing something different. We’ve had these puppets made of each member of the band and these puppets are basically playing in these more cliché metal music video spots and even some of the scenes in the video are from past August Burns Red videos as well. There’s a nod to the “Meddler” video where we’re playing out in the field and there was a lot of time and work put into making these puppets. We sent the creators a bunch of photos of our heads of every angle and they 3D printed each puppet and then they had to paint all of the facial hair and the skin color. They even got down to the details as much as adding the sticker that’s on the back of my guitar, so there’s a lot of really cool detail in it. We think it’s cool, it’s a funny video and people seem to like it.

Let’s talk about your upcoming record “Phantom Anthem”. What was it like working with Carson Slovak and Grant McFarland?
We love working with those guys, this is actually our third full length that we’ve done with them. They did “Rescue & Restore” and “Found In Far Away Places” for us. They work out of Lancaster, Pennsylvania which is our hometown, so working with them is really nice because we can treat it sort of like a 9 to 5 job, you know, we get up in the morning, we go to the studio, which is like work and we spend our whole day there working on it and then we get to come home, eat dinner and sleep at home. It’s not like our past records before we started working with them where we would travel to Florida or Nashville or you know, somewhere far from home and we’d be living out of a hotel while we made the albums. They also understand how we work, they know that when we’re in the studio, we’re focused on the album and getting everything tracked as best we can and we don’t screw around a lot. We’re very serious when we’re in the studio and they are serious as well because they know we just really want to get in there and work on the album. We spend so much time preparing to record and writing these songs that when we’re in there it’s just like “let’s get to work, let’s get down to business”. They know how to get the best takes out of us, they know each of our personalities, Grant does a great job working with Jake doing the vocals and their stuff sounds incredible. They’re great producers and great engineers. They work as a team and they both have their areas that they focus on, for instance Grant is the vocal producer and while he can handle other stuff, he shines with the vocals. Carson handles most of the string tracking, the guitars and the bass and Grant is also kind of the drummer guy. He’s a drummer himself and he’s really good at producing drum parts. They’ve done a lot of stuff, they work across a lot of different genres.

When you look at your Facebook biography, it promotes the new album a lot and it says it is typically August Burns Red but better in several aspects.
This made us wonder what are some key points that are particularly better?
If you’re into technical guitar work it is definitely better, we stepped it up. There’s some crazy guitar work on this record and we’re really proud of that. There’s a lot of dynamics which you’ve come to expect if you’ve been a fan of our last couple of records. We have a western section and a traditional Jewish section, the aspects are more serious on this album.

Given the fact that it is a typical ABR album, is there a different musical avenue that you’d like to explorer, either with the band or aside from it?
I really like a lot of more chill music but I don’t really have time to do a side project. ABR takes up all of my creative free time, which is fine, I love it. If I wasn’t writing so much for ABR I would want to do something else to have that outlet.

If you were to start a different project, what kind of music would you make?
I would probably make something more with an indie-rock vibe, something less extreme.
Probably something less physically demanding, both on stage and on plain, ABR stuff is very challenging on the guitar, we work hard to keep our chops up to be able to play it and if I were to do something else I would want to chill out a bit, kind of jam a little more.

The artwork for the upcoming album looks gorgeous. Is there any special story behind it?
It ties into the title ‘Phantom Anthem’ which was created by our drummer. The Phantom side would be an underground movement, you could even say the metal scene is an underground thing, it doesn’t  appeal to everyone. But there is obviously a large group of people on this underground movement and  us phantoms would maybe go unnoticed by someone who passes us but all together, that is the anthem side. On the cover you have silhouette you have an unrecognizable person, a phantom, but the rose represents something beautiful, the coming together, that beautiful thing is the anthem.

On your last record you worked together with A Day To Remember’s Jeremy McKinnon. Could you tell us something about this experience?

Yeah sure, Jeremy is an old friend of ours, we go way back. There has always been a mutual respect.
We were tossing around the idea of doing a guest vocalist spot for the song ‘Ghosts’ and we reached out to him if he had any interest and he said he’d loved to so we sent him the track and he sent us back his own written lyrics for his own part. We just let him have creative control over his section and the rest is history.

As a member who has been in ABR since the beginning, what are some changes you have witnessed when it comes to recording and touring throughout the years?

We used to tour in a van, that’s a big change. We were in a van for the first 5 or 6 years of touring and we were sleeping in the van or crashing on people’s floors. It was fine at the time, everything was a new adventure, but when we started to grow we wanted to be more comfortable and get more sleep at night and our sets were getting longer.
In the studio, we now have a lot more time. For ‘Thrillseeker’, we wrote the record in about two weeks. We were very rushed and we were working around the clock but now we have two months to make a record so it is more relaxed and we don’t have to settle.

Is there something in particular you would like to achieve with the upcoming record that you haven’t  been able to achieve yet?

We’d like to continue to grow. I guess, one thing would be to win a grammy award. We were nominated but didn’t win.

Do you have some advice for smaller bands who are just starting out?

Before you try to get out there too much, try to build a nice fanbase in your hometown.
So don’t try to brand out too soon, try to build up your local market first.
Be smart with your money! You’re gonna need so much money so don’t waste it on stupid stuff like alcohol and junkfood.