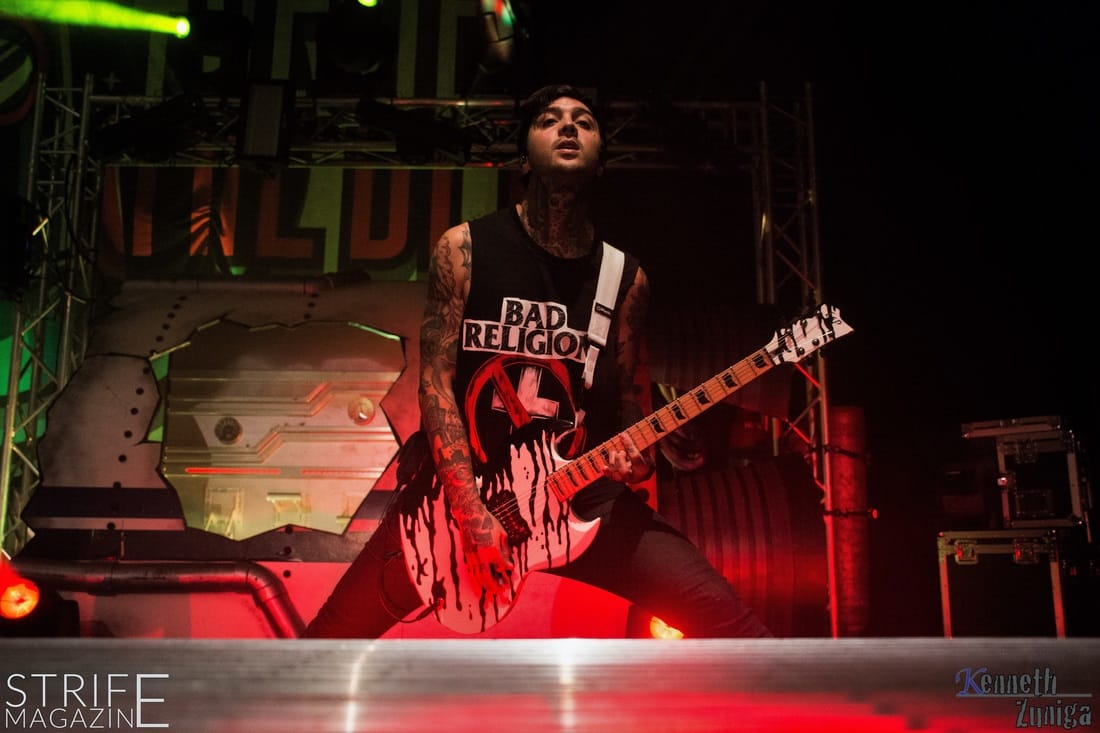 A few months ago, we asked our readers to join us in coming up with a live of questioning for Pierce The Veil.
However, due to a tight schedule, this interview was delayed up until the point when they were in the city where we were going to see them, resulting in a face-to-face interview with guitarist Tony Perry. As the questions were a few months old, some might slightly be outdated, but as we teamed up with you guys, we wanted to stick with them.
We discussed their latest record ‘Misadventures’, touring and much more.
Here’s everything we talked about. Hope you enjoy!

SM: First of all, thank you for doing this, it’s a great honor.
We wrote these questions a while back actually, together with fans, we collaborated.

Q: It’s no secret that the process of writing ‘Misadventures’ went a little bit different.
Could you tell us something about that?

T: We went in the studio with ten songs ready and two of them didn’t make the record so we rewrote two songs in the studio, we finished all the instruments. But we had tours booked already so we had to go out on Warped tour and the Sleeping With Sirens World tour so we had a lot of touring booked so we couldn’t finish the vocals on the record. Then when we were finally done with all the touring and got back to it, Vic did some travelling to kind of figure out what he wanted to write about and kind of rework some of the songs. That is kind of what made it take so long and that is also why it is called ‘Misadventures’, ‘cause of all the different things that happened throughout that process that kept pushing the record back further.

Q: On the ‘Misadventures’ tour cycle you’ve toured with amazing bands like Neck Deep, Letlive. and I Prevail. Are there any other bands in particular that you’d like to take with you on tour?

Q: For ‘Misadventures’, what song took the most time to write?

T: I guess, ‘Circles’ was some of the last songs to be finished and it was one that was written pretty early on, so I guess that one technically took the longest, because it was the last one for Vic to go back to and actually finish the vocals, it was just sitting for a couple of years, if not more, so yeah it took a while to write that one and that was the last one that he found inspiration for. I think he was in Seattle when he figured out what to write about and finish the record and he called us and told us that day.

SM: It’s cool that that one ended up as a single!

Q: Is there a question that you just get tired of answering? *secretly hoping we don’t have that question on our list*

Q: Which artists or bands have inspired you most to make music?

T: Growing up, there were a lot of punk-rock bands in Southern California that we were all in to. We all kind of found out that a lot of the shows where we were at in high school, we were all at together, but we didn’t know each other back then. So we were all in to the same kind of music. And I think that stuff inspires you in the beginning but now it’s kind of everyone we tour with. Every time you watch a new band play or you see how other people do things, you take a piece and you remember that when you’re writing your next songs or when you hit the stage next time. You learn from other people as you go.

SM: And those people have also been an inspiration for ‘Misadventures’?

T: Yeah, definitely. A lot of that also is the fans. After our first record, we did a lot of touring and when we went back into the studio we realized what we wanted to play live so now every time we write a song we sit there in the studio and play it live together a few times and feel it out and try and think how it would go in a show, like what’s the feeling, are people going to be jumping around to this or are people going to be singing along and we keep that in mind for the show, because everything is for the liveshow.

Q: Have you ever thought about what your life would look like if you wouldn’t have pursued a career as musician?

T: Yeah, sometimes I don’t know what I would have continued to do. I was working at a guitar store for a long time and I’d started building and working on guitars and electronics. I think if I wouldn’t have done the band, I would still be working on instruments or something else.

Q: Do you guys have any pre-show rituals?

T: Usually like an hour before the show we call it our warm up time but all we really do is just get ready, stretch, listen to music that gets us ready for the show. It’s usually just us in the room sitting there so we just get ready for the show and if there’s anything we need to talk about or prepare for, that’s what the prep-time is for.
Nothing weird, nothing crazy.

Q: Lyrically, is there any song on ‘Misadventures’ you connect with more than other tracks?

T: This one’s hard, because this is really more of a question for Vic cause he’s the one that writes all the lyrics. And we kind of find out from him after the fact what things are about and sometimes we don’t even know, sometimes we just have to guess because he doesn’t tell us every little secret.

Q: When you listen to music, do you pay more attention to the lyrics or to the melody?

T: I pay more attention to the guitar, but yeah at first listen it is definitely melody. But I usually attach myself to songs lyrically a lot more.

Q: Do you have any advice for bands who are just starting their career as musicians?

T: As far as what we did is we just hustled and go to other shows in San Diego and stand outside with flyers and burn copies of our music and hand them out to people as they left the show. Just try and let as many people as possible know about your band. Now with social media it’s different and there are a lot of other ways to spread your music so whatever you can do, just keep pushing and try to get your music in as many ears as possible.

Q: What has a bigger effect on you: creating music of listening to music?

T: It’s two very different things. I guess, listening to music has a huge effect on what we want to do when we’re going to the studio next time. When you hear something new and something powerful it inspires you and you want to write something as good as that.

Q: Do you feel like listening to music has every helped you through a hard time?

T: Yeah, I think so. There’s definitely times when you’re dealing with something and something’s troubling you and songs can lift you up and bring you out of that and we hear from a lot of our fans that our music helps them that way and that’s pretty amazing to know that we can help anyone, someone that we don’t even know, get through something because of a song we wrote. That’s pretty powerful.

Q: Last question, can we take a photo with you? (Yeah, we’re huge fangirls) 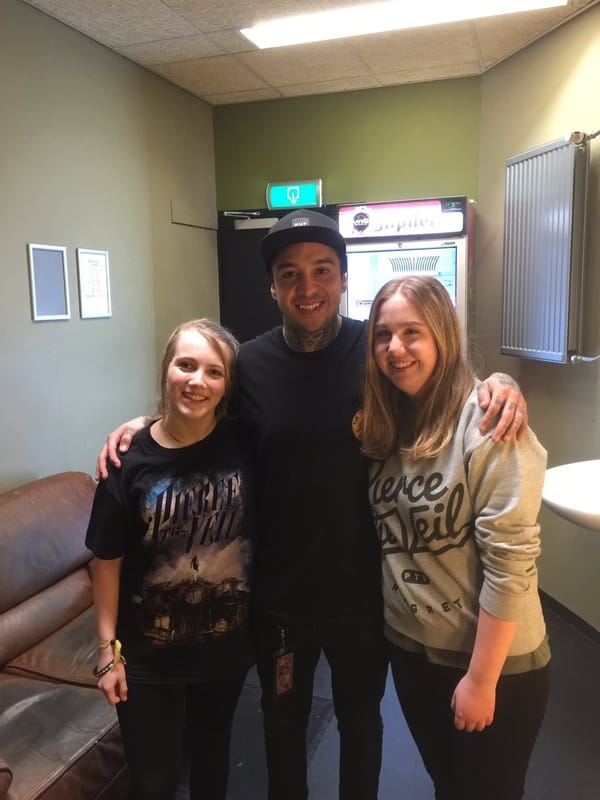