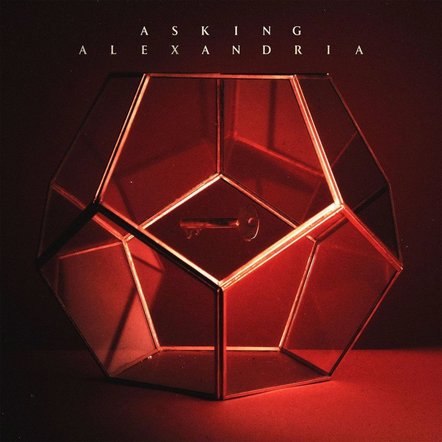 Anyone who has been a long-time fan of AA will probably remember 22nd January 2015, because that was the day that Danny Worsnop announced his departure from the band, to focus on his new band; We Are Harlot. After much speculation as to what the future of AA would be, on May 26th 2015, Denis Stoff was revealed to be the band’s new frontman. I could give you a band history recount, but unfortunately that’s not the subject and plus if you have a few minutes to spare, it’s quite an interesting read. Little did we know however, that Worsnop’s departure would not be a permanent fixture as he announced his return in mid-October of 2016. So, let’s take a look at how far Asking Alexandria have come since their inception in 2006.

The album opens up with ‘Alone in a Room’. The soaring guitar takes the lead, and it’s slow and melancholy. You can’t deny that the song is tinged through the electronic influences, but it works with the alt rock sound brilliantly. The first thought that popped into my head when I was listening to the album was that it sounded very reminiscent of BMTH’s ‘That’s The Spirit’; though, if at all possible, louder and a hundred times more aggressive with its instrumentals. The song deals with Worsnop’s fear of being left alone in order to deal with his demons (‘my mind kept playing tricks on me’), whilst also needing to face that fear so that he can become the best version of himself that he can be. The hook in this song is a million types of fun and infinitely catchy. It’s a song that is perfectly balanced with infectious melodies and insightful lyricism—as Worsnop explores his own shortcomings but also lets us reflect on our own lives and what we, as individuals want to become (or leave behind). It’s a great taster opening track for what kind of musical styles and themes we can expect to hear from the rest of the album.

Up next, we have ‘Into the Fire’. The bass here drips with influence of classical rock, anything from Led Zeppelin to Guns’n’Roses. The guitars on this track are heavier, faster and much more aggressive—but they work brilliantly with Worsnop’s soft vocals. The instrumentation here feels cleaner, and the drums are really given the chance to shine. The song explores how again, Worsnop must confront his fears so that he can come out on the other side as a better person, with: ‘I wouldn’t take back a moment’ is a great representation of what is essentially a metaphor for rebirth, and of the necessity of hardships so that we can learn from our mistakes.

‘Hopelessly Hopeful’ is without a doubt one of my favourite tracks on the record. The themes in this album are seamless—they flow like water from one to another, and each one feels like the next logical progression. Here, Worsnop asks the same question that we all ask ourselves at one point in our lives, ‘what’s wrong with me?’ and it’s beautifully poignant. The guitars on this track are so enjoyable that it’s criminal—fast but by no means aggressive—they provide continuous energy that never outwears its welcome or becomes old. If there’s one thing that can be said as a shining star for this album, it’s the choruses: they are decadently catchy—enticing you into singing along by the second listen.

Though the first two songs were confident openers, the album doesn’t feel as though it hits its stride from ‘Hopelessly Hopeful’ onwards, and ‘Where Did It Go?’ is a fitting example of this. The confidence in Worsnop’s vocals and lyricism is admirable, and ironically, it’s the theme of the song, ‘there’s only one throne and I’m not done with it’. The song is almost like a letter to their past selves as Worsnop recounts the history of the band, and though the song is heavy with the electronic undertones, it only works to their advantage. The song has a fascinating narrative about how, in the end, success becomes meaningless if you become complacent and if you forget why you started something in the first place. It’s defeatist, angry and resigned and it serves as almost a warning to any bands that want to make it ‘big’.

One of the most fantastic things about this record is how expertly the band balances their influences, from alt rock, some pop elements and techno—the songs flow like a river, uninterrupted and smooth. The album is confident without being cocky and deliciously aware of its strong points and limitations.

Even after only listening to a couple of songs, it becomes abundantly obvious how much attention and love was poured into the making of this album, and as such, it’s hard to criticise, as even the weaker songs bring something enjoyable into the fold and for me, ‘When The Lights Come On’, was one of the weakest songs on the record. Though I didn’t personally connect with it, like I did with other songs, it was by no means a bad song—but it quickly became repetitive and a little samey. With the beginning of ‘Under Denver’, the album starts to take a breath, to slow down and show us that it’s not all strumming guitars and banging drums, and the addition of the keyboard on this track definitely gives it a softer vibe, and that’s made all the more prominent with the drums being the leading instrument. ‘Under Denver’ is a great exploration of accepting hard truths (‘your truth is wrong/it’s best to accept it’) and that it’s pointless to burn yourself out over something you have no control over. However, the message of the song feels a little negated by the electronica that takes over during the chorus. It feels a little clunky and unnecessary, and I was afraid that it would go on and on, much like it did in FOB’s ‘Young and Menace’.

The beautiful acoustic guitar on ‘Vultures’ is a welcome beat of rest from the unrelenting energy that oozed out of every preceding song. It’s a beautiful song with just the guitar, a Cajon box and Worsnop’s pleading vocals. The song follows the narrative of losing one’s virtues, and again, of being complacent and doing what they’re told. It provides a chilling insight into greed, bitterness, jealousy and loss—and how those emotions can ultimately be the things that motivate us: (‘I’m much older, I’m bitter, I’m jaded, I’m lost’). The entire song is a haunting metaphor of not wanting to lose, but preparing yourself for the possibility that it might be the best, and only outcome.

The thing about this album having so many fantastic songs is that I have too much to say on all of them, and I sat and typed what I thought of these songs to my heart’s content then I might as well turn this review into a thesis, however, the album’s closing song (if you exclude the radio edit of ‘Into The Fire’), is ‘Room 138’. It’s a chilling, haunting and lingering narrative of a night of excessive drug consumption. It takes us through our character ‘on my back, breathing heavy staring at the light’ and leads us through their certainty that this is the end, and how they don’t want it to be—and finally the redemption of being given a second chance and not squandering that.

Ultimately, this album is about redemption. That’s the key word here. It’s about being given a second chance, and doing something with it. I was ready to entirely dismiss this album, simply because before now, I’ve never given Asking Alexandria much more than a passing thought, but I was honestly kind of blown away by how much I enjoyed this record. It’s resentful, introspective, angry and demanding—jumping from genre to genre with ease (minus a few hiccups here and there). With this album, Asking Alexandria have ensured that they will not be forgotten, and with such a strong album, there’s no reason to want to forget them.